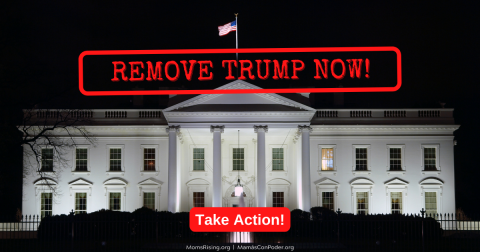 We are horrified by the violence pro-Trump terrorists and white supremacists committed at the U.S. Capitol and across Washington, D.C. yesterday, and the swarming of state capitals across the country.

→ *Join us in urging Congress to impeach Trump immediately and for the Vice President and Cabinet to invoke the 25th Amendment to remove him from office ASAP.

These were not peaceful protests but rather an outrageous attempt by a pro-Trump mob to use force and violence to overturn a free and fair election. There is no question that Donald Trump, aided and abetted by unprincipled Republican members of Congress, is responsible for this attack on our democracy -- both by inciting the violence and exacerbating the structural racism and bigotry that drives it. He made a dangerous situation even worse with his incendiary speech at his rally, tweets, and disgraceful video yesterday.

It would be irresponsible and dangerous for lawmakers to allow Trump to complete the last two weeks of his term. Trump obviously can not be entrusted to be our Commander in Chief with access to our nuclear codes. He must be removed from office now. We are asking Congress to impeach him and also for Vice President Pence and the Cabinet to invoke the 25th Amendment to remove him from office. *Click here to join us in calling on Congress to take action to remove Trump now: https://action.momsrising.org/sign/impeach-25thamendment/

That Trump supporters were able to breach the Capitol with relative impunity stands in stark contrast to the response we saw to the anti-police brutality protests throughout 2020 and Black Lives Matter demonstrations this summer, and highlights how deeply structural racism and white supremacy is woven into our society. We must remember Miriam Carey [1], a Black mom who crashed her car near the Capitol and was shot five times and killed by the Capitol Police. Every leader in this country must recommit to ending systemic racism, doing everything in their power to ensure the safety of marginalized groups of people, and continuous advocacy for equity and justice for every single person. This includes holding accountable members of Congress, along with the President, whose insurgent language and false claims clearly stoked the violence that took place yesterday.

Our democracy is being tested like never before, but we will prevail. Yesterday, when the violence broke out, Congress was in the process of counting the electors and declaring Joe Biden to be the president-elect, and Kamala Harris the vice-president elect, that they are. That declaration was delayed but could not be denied.

→ *Join us in urging Congress to impeach Trump immediately and for the Vice President and Cabinet to invoke the 25th Amendment to remove him from office ASAP.

Moms will never stop protecting our democracy. In Georgia, MomsRising joined with local partners, including the Georgia Coalition for the People’s Agenda along with the Transformative Justice Coalition to drive voter turnout, sending 380,000+ handwritten postcards to low-frequency voters, involving 3,000 volunteers in phone banking to get out the vote, and sharing information about when to vote through traditional and social media in English and Spanish. Moms will increase our activism getting out the vote in upcoming elections, and when Congress returns to its business we will continue to demand meaningful pandemic relief, paid leave, affordable child care, health care, fair immigration policies, gun violence prevention, fair wages, non-punitive, non-carceral approaches to community safety that lead states to shrink their criminal-legal systems and center the protection of Black, Indigenous, and Latino lives, and more. We are more determined than ever to end the racism in policing that is evident when we contrast the frequent, horrific police assaults on Black and Brown people, like the killing of Miriam Carey, with the way white Trump supporters were able to breach the U.S. Capitol yesterday.

→ The more people who call for Trump’s removal, the faster it can happen. So please share this action link on social media, with friends, and far and wide. Here’s that link again so you can share it: https://action.momsrising.org/sign/impeach-25thamendment/

America’s moms, parents, and grownups stand together, in solidarity, against all those who threaten our democracy. And we thank you for standing with us and for our democracy now.