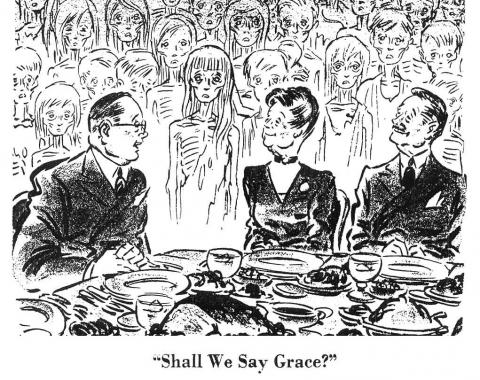 Shall We Say Grace?

When I was a child, my father kept an editorial cartoon pinned up in the vestibule of our church that made a deep impression on me I have never forgotten. It was a black and white drawing by the Pulitzer Prize-winning artist Herblock that was originally published in the Washington Post in October 1947. The picture shows well-dressed, happy White people sitting at a banquet table overflowing with place settings, goblets, and so much food the table cannot hold any more: a roast, gravy boats, bread and butter, covered dishes, heaping platters of sides. Hovering behind them and filling the rest of the image is a crowd of gaunt, wide-eyed hungry children dressed in rags. There are too many of these skeletal figures to count; the starving masses go on and on into the distance. Back at the table, one of the dinner guests is speaking cheerfully to his smiling companions. The caption reads: “Shall we say grace?”

Shall we say grace? In his very last book, Where Do We Go from Here: Chaos or Community? Dr. Martin Luther King, Jr. wrote: “There is nothing new about poverty. What is new, however, is that we now have the resources to get rid of it. Not too many years ago, Dr. Kirtley Mather, a Harvard geologist, wrote a book entitled Enough and to Spare. He set forth the basic theme that famine is wholly unnecessary in the modern world. Today, therefore, the question on the agenda must read: Why should there be hunger and privation in any land, in any city, at any table, when man has the resources and the scientific know-how to provide all mankind with the basic necessities of life?” But despite the decades that have passed and the unparalleled advances since then in scientific and technological capability and global resources and wealth, hunger and want are still rampant both at home and around the world.

Dr. King went on: “There is no deficit in human resources; the deficit is in human will… The well-off and the secure have too often become indifferent and oblivious to the poverty and deprivation in their midst. The poor in our countries have been shut out of our minds, and driven from the mainstream of our societies, because we have allowed them to become invisible. Ultimately a great nation is a compassionate nation. No individual or nation can be great if it does not have a concern for ‘the least of these.’”

Will we one day find the will to make our nation truly great? As we celebrate Thanksgiving many Americans will be indeed be blessed and deeply grateful to gather with family and friends around a table that looks like the one in the cartoon, with “enough and to spare.” But it is still a time for each of us to do what we can to see, remember and help the many millions who are still outside watching quietly—hungry and starving—with no place at America’s table of plenty.

I end with a grace.

God, we thank You for this food

for the hands that planted it

for the hands that tended it

for the hands that harvested it

for the hands that prepared it

for the hands that provided it

and for the hands that served it.

And we pray for those without enough food in Your world and in our land of plenty.