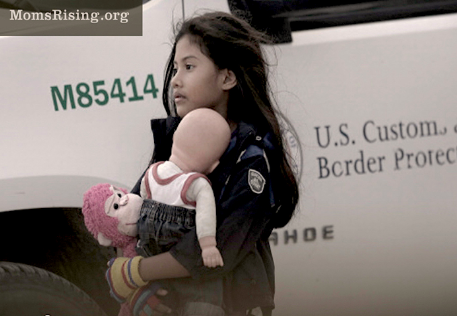 A young child holding a doll and a toy and standing next to a U.S Customs and Border Protection vehicle

Separating Children from Their Parents is Inhumane

This week, the New York Times reported that more than 700 children have been taken from parents arriving at our borders since October, including more than 100 children under the age of 4.

Our government has a responsibility under U.S. immigration law to hear a person’s immigration or asylum case, not to try to scare them away from asking for help.

Separating children from their parents is unspeakably cruel! Tell your member of Congress and U.S. Secretary of Homeland Security Kirstjen Nielsen to keep parents and children together and STOP separating families!

Mirian is one of the many mothers who have been impacted by this inhumane policy. She fled riots and violence in her native Honduras, seeking asylum (as is her legal right) in the United States with her 1 year old son. Instead of finding sanctuary, she was separated from her son - her last sight of her baby boy was as he was taken away crying in a U.S. government car. This is not right - international conventions guarantee asylum seekers the legal right to seek sanctuary on our shores. Punishing asylum seekers by separating families is inhumane and beyond belief, yet it's the story of too many mothers and children who seek asylum on our shores.

Stand up for Mirian and tell your member of Congress and U.S. Secretary of Homeland Security Kirstjen Nielsen to keep parents and children together and STOP separating families!

The cruel practice of purposeful family separation doesn’t just happen on our border. Under President Trump, ICE agents are not just focused on deporting people with criminal records who they think pose a risk of danger to society, but are also moving aggressively within our communities to separate children from their parents who are community leaders, our colleagues, our family members, and who are working hard.

Due to these policies and practices, thousands of children across the country have been left without one or both parents. Adding to the horror of the situation, many children have literally been left stranded at school, or otherwise alone and with no way of contacting their parents or seeking help.

Department of Homeland Security Secretary, Kirstjen Nielsen has the authority to decide how ICE and other immigration officials enforce policies. Members of Congress also have authority to intervene and have in fact been able to successfully protect vulnerable members of the community from destructive immigration proceedings. As both Republicans and Democrats are closely tracking what their constituents, and particularly women, care about, voices like yours can make a difference to hundreds and thousands of parents across the country.

Tell the Sec Nielsen and Congress that separating children and parents is not acceptable to the mothers and fathers of America!

We believe that families should stick together, that we should look out for each other, and that hard work should be rewarded.

The poem inscribed at the base of the Statue of Liberty boldly declares:

“Give me your tired, your poor,
Your huddled masses yearning to breathe free.”

We need your voice to remind Secretary Nielsen and Congress that this spirit of welcome of immigrants is our nation’s strength. Separating mothers like Mirian from their children does not represent the values we teach our children -- or what we aspire to be as a nation.

Your voice matters and together we can stand with our children and families by calling on Congress and Secretary Nielsen to create humane immigration practices and policies that put families first.