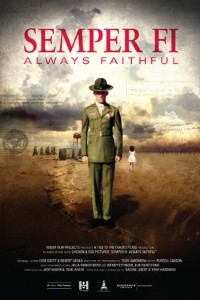 Last night I went to a showing of Semper Fi, a shocking documentary about the families of Camp Lejeune who were literally poisoned by contaminated drinking water for 30 years. The reason this topic was of interest to me is because Camp Lejeune is in my state and I’ve been learning about the need for toxic chemicals legislation for years now through MomsRising.

Here are the basics of what happened:

Between 1957 – 1987 an estimated 750,000 to 1,000,000 people may have drank and bathed in tap water containing extremely high concentrations of toxic chemicals at Marine Corps Base Camp Lejeune in Jacksonville, North Carolina. It is believed to be one of the largest water contamination incidents in US history.

Leaking underground storage tanks, industrial area spills, waste disposal sites and waste from an off-base dry cleaning business were identified as the sources of the contamination. The chemicals found in the water include benzene, vinyl chloride and trichloroethylene (TCE), three known human carcinogens, in addition perchloroethylene (PCE), a probable carcinogen.

One of the main voices in the movie and, in fact, one of the primary reasons this ever got any attention, was that of Jerry Ensminger. His daughter, Janey, died in 1985 at nine-years-old from Leukemia. In August of 1997, he finally began to get some answers about why she had gotten sick. However, it wasn’t until fourteen years later that the government was able to actually get something down on the books to help the other families still suffering. On August 6, 2012, President Obama signed the Janey Ensminger Act into law. There are still a lot of unanswered questions, people who will never know why their loved one died, and others who will never be held accountable for letting this happen. But it’s progress and I guess for now, that is all we can hope for.

During the movie, I just kept thinking to myself, “How could this happen?” “How could it take so long to get these Marines and their families help?” “Who is responsible for this?” And as the movie continued, some of the answers to these questions became obvious.

"How could this happen?"

No really. How could hundreds of thousands of people... of soldiers and their families... be exposed to contaminated water on our government’s watch? It is an incredible failure of oversight. Then I realized this wasn’t the first time, and remembered that a good friend of mine’s dad had died from Leukemia after being exposed to Agent Orange.

There probably isn’t a specific answer to ‘how could this happen’ but while watching the movie I drew some conclusions.

“How could it take so long to get these Marines and their families help?”

This is where the incredible changes to infuriating. Not surprisingly, the answer to this is it’s all about the money. And not even the government’s money - but private interests. The chemical companies lined up one after another in opposition to these families seeking help and justice, all for the sake of saving money.

At one point in the movie Maj. Gen. Eugene Payne says,

We understand there are people who believe their health concerns may be a result of time spent at Camp Lejeune. The Marine Corps consists of war fighters... we have no public health experts, and accordingly we rely on the expertise of the scientific organizations to inform our understanding on this issue.

A few moments later in the movie, they show video from an EPA meeting where scientists are gathering to decide whether PCE (one of the main contaminants at Camp Lejeune) should be regulated as a “known” carcinogen. The classification would have extensive legal and financial implications for chemical manufacturers and polluters and around the table sat dozens of experts from chemical manufacturers and polluters to ‘testify’ about the scientific findings. (How can the public compete with that? There were just two people from the public there whose families had been exposed at Camp Lejeune.)

We have groups of scientists who meet and they decide, “Is it a human carcinogen?” “Is it an animal carcinogen” “Do we not know what to call it?” And the decision is not just a scientific decision. It is a multi-billion dollar decision with multi-national implications. Because if you can delay in classifying something as a human carcinogen, you may be saving companies billions.

So to make it perfectly clear: the Marines said they had to rely on experts from the scientific organizations for information about a chemical... then the people who make and profit from the chemical are the experts who are asked if it should be taken off the market. Of course, they delayed as long as possible in order to save their companies money.

When it comes right down to it, the politicians, military leadership, and corporate shills, all decided that the mighty dollar was more important than the lives that were and are still being lost to a chemical.

“Who is responsible for this?”

I’m going to go out on a limb here and say that, when it comes right down to it, we all are. We, as a country, have allowed our system of government to be co-opted by big dollar interests. We, as citizens, have not demanded the level of transparency that we deserve. And too many of us, even friends and family, keep quiet when we know something is wrong, because we’re afraid of losing our jobs, not being believed, or being wrong.

After the movie I had the pleasure of speaking with Jerry Ensminger over drinks. As a parent, I struggled with how I could even talk to him about what he went through and how he found the strength to carry on after the loss of a child. Nearly 27 years later, the sting hurts no less than it did when he lost his little girl so long ago. I sat and talked with Jerry about Janey while tears ran down our faces and I was filled with admiration at how he could keep the fight going for so long, in the face of such opposition, and under the cloud of despair that one feels after the loss of a child.

Because I am familiar with the Safe Chemicals Act, I asked him what his thoughts were on it and he said he supported it. We talked about the ludicrousness that out of around 80,000 chemicals that are on the market right now, only a handful have been tested for safety. We talked about how the chemical companies don’t have to prove their products are safe; rather, the government has to prove them unsafe. And we talked about how frustrating it is that even after we know a chemical is dangerous, we have to fight against corporations with billions of dollars for year after year in order to get anything done about it.

It shouldn’t be this hard. Further, the health and safety of the citizens of this country should not be up for sale to the highest bidder. This shouldn’t be a partisan issue, either. Toxic chemicals don’t care if you are a Democrat, a Republican, or an Independent - they’ll poison you just the same. We have to find a better way in this country to ensure the products we bring into our homes are safe - and the Safe Chemicals Act is it. It’s time to pass it!

Don't be a coward: speak up. Tell congress it's time to take action on toxic chemicals reform. Don't be lazy. Do you know someone suffering from cancer? Have you lost a loved one to cancer? You owe it to them to fight for this legislation. And don't say you're too busy to worry about this kind of stuff. Cancer, diabetes, learning disabilities, and all the other diseases linked to toxic chemical exposure, don't care how busy you are, they'll keep affecting our families until we demand this to stop.

Call your Senators today and tell them, “I support the Safe Chemicals Act and I want you to support it to.”

(If you have Netflix, you can watch Semper Fi instantly here. As an interesting side note, the soldier on the front cover is an old picture of Jerry, and the girl in the background is Janey.)