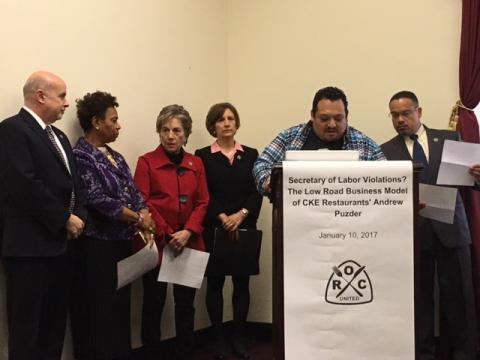 Members of the House stood in support of workers, whose stories of labor violations were read at a ROC United event on Capitol Hill

“My experience at Carl’s Jr. left me feeling hopeless. I tried to communicate the problems experienced with my supervisors, and yet the problem continued and nothing was done about it. If Andrew Puzder allowed these things to happen at a company like Carl’s Jr, how would he protect workers across the country?” – Abel Gonzalez, a Carl’s Jr. worker from California

Abel’s story was just one of the many stories from employees of Carl’s Jr. and Hardee’s restaurants shared at two events on Capitol Hill on Jan. 10. Each story told of unfair treatment, understaffing, wage theft, unsafe working conditions and/or sexual harassment workers were subject to while working at one of the restaurants under the CKE Restaurants umbrella. The head of CKE Restaurants is Andrew Puzder, who President-elect Trump recently nominated to be the next Secretary of Labor.

These stories and the results of a survey of CKE employees were published in a new report from Restaurant Opportunities Centers (ROC) United titled “Secretary of Labor Violations? The Low Road Business Model of CKE Restaurant Inc’s Andrew Puzder.”

Among the findings of the survey, which asked about wages and working conditions:

An article in the Guardian covering the ROC United report noted that “CKE Restaurants has settled a number of multimillion-dollar class action lawsuits brought by employees in relation to pay and conditions,” and a piece on TalkPoverty notes that, according to a recent Labor Department investigation, about 60% of CKE restaurants were found to be in violation of labor laws. Puzder has also opposed a significant raise in the minimum wage and the Department of Labor’s new overtime rule and defended the company’s use of scantily-clad women in its commercials.

Other stories of mistreated workers were heard later the same day at a forum convened by U.S. Sens. Elizabeth Warren (D-MA) and Patty Murray (D-WA).

“For many years, I started working 30 minutes before my clock-in time to make sure that I finished all my duties on time,” Ramirez said. “My managers were aware that I was working those extra 30 minutes but I was never paid for that time or asked to clock in when I started working early. Managers would become very upset if I didn’t finish my duties before the end of my shift, and several times they retaliated against me for it — they would cut my hours, change my schedule or send me home early.”

Lupe Guzman, a single mother with six children, described the seven years she spent as an assistant manager at Carl’s Jr., most of the time earning $8.75 an hour. She said she was robbed twice at gunpoint while working the window at her fast-food restaurant. “Corporate did not care what I went through,” she said. “The second robbery, I was shaking and throwing up and they didn’t care. All they care about was how much was taken and why did the police close the store.”

She described living on subsistence wages, and being dependent on SNAP and Medicaid. “My car hasn’t worked in months because I can’t afford to fix it. It’s either rent and bills or my car. I am tired and I am sleepy but I do what I have to do because my kids are my life.”

The workers’ testimony came two days before a planned series of protests in front of Carl’s Jr. and Hardee’s restaurants in more than two dozen cities throughout the country. The protests originally were planned to overlap with Puzder’s Senate confirmation hearing, which originally was scheduled for Thursday, but has since been delayed.

Thousands of CKE’s cooks and cashiers plan to participate.

“Andy Puzder represents the worst of the rigged economy Donald Trump pledged to take on as president,” Terrance Dixon, a Hardee’s worker in St. Louis, told The Hill newspaper. “If Puzder is confirmed as labor secretary, it will mean the Trump years will be about low pay, wage theft, sexual harassment and racial discrimination, instead of making lives better for working Americans like me.”

Join MomsRising in standing up and speaking out against Puzder and several other of President-elect Trump's Cabinet picks here.