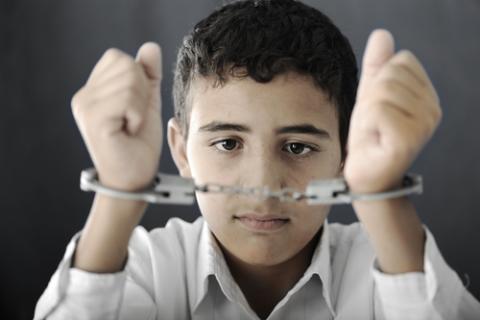 School Should Be A Pathway To Success, Not A Pipeline To Prison!

The stories are unbelievable!

A Queens first grader with learning disabilities was handcuffed by police and suspended from school when he became upset while painting an easter egg in class. Alexa Gonzalez, a 12-year-old Queens girl was suspended from school and hauled off in handcuffs for doodling her name on her desk in erasable marker. Two 5th graders were even suspended for using allergy nasal spray in school.

Disturbingly, these kinds of suspensions happen much too often. NYC schools imposed nearly 70,000 suspensions in the 2011-2012 school year.  These suspensions disproportionately impact children with disabilities and children of color and a task force examining disciplinary practices in the New York City’s 1.1 million-student system found that “the overwhelming majority of school-related suspensions, summonses and arrests are for minor misbehavior, behavior that occurs on a daily basis in most schools.”

Experts in every area of education and criminal justice agree that overly harsh disciplinary policies push students down a pipeline from school into the juvenile justice system.

Click to tell Mayor Bill DeBlasio that it’s time to end the school-to-prison pipeline and New York City should lead the way!

*When you click this link, you instantly sign on if we already have all your information. It’s easy, takes a only moment, and has a big impact.

What is the school-to-prison pipeline?

According to the ACLU, “The ‘school-to-prison pipeline’ refers to the policies and practices that push our nation's schoolchildren, especially our most at-risk children, out of classrooms and into the juvenile and criminal justice systems. This pipeline reflects the prioritization of incarceration over education.” For a growing number of students, the path to incarceration includes: failing schools, zero tolerance school discipline policies, policing school hallways, disciplinary alternative schools, court involvement, and juvenile detention centers.

THREE MILLION students, including preschoolers and kindergartners, are suspended from public schools each year across the nation. Children of color and children with disabilities are disproportionately suspended. Indeed, more than one out of four boys of color with disabilities and nearly one in five girls of color with disabilities receives an out of school suspension. The vast majority of these suspensions are NOT for violent behavior. Nationally, the rates of school suspensions have increased dramatically —from 1.7 million in 1974 to 3.1 million in 2000 — and have been most dramatic for children of color.

Here in New York City, the situation is no different.

Tell New York City mayor, Bill DeBlasio that school should be a pathway to success, not a pipeline to prison for children with disabilities and children of color! It’s time to end the school-to-prison pipeline in our city!

Let's face it! NYC Department of Education school discipline policies are in need of a serious shift. Current policies do little to support student development and accountability and instead mark many of the city’s most vulnerable students with the scarlet letter S for suspensions. The repeated use of suspensions and exclusionary discipline policies for minor offenses pushes students further away from quality education and deeper into the school to prison pipeline.

All NYC students have the right to a quality education in the city, discipline policies that exclude thousands of NYC students from that right need to be changed!

Please join us in urging de Blasio to reform school discipline policies and stop the school to prison pipeline in NYC!

Over the next 30 days, Mayor Bill de Blasio is considering important reforms to school discipline and policies and policing practices in NYC Public Schools. Police in schools and excessive disciplinary policies in schools heavily target black, latino and disabled students. We are urging the Mayor to adopt changes that will dismantle the school to prison pipeline.

The school-to-prison pipeline affects students across the nation pushing students out of school with exclusionary disciplinary policies that include suspensions, expelling or even arresting kids for minor offenses that use to be mediated by principals and school staff. It doesn't end there, the most significant indicator of which children will be suspended is not the type of offense but the color of their skin, their special education status, what school they go to, and whether they have been suspended before.

By Investing in and expanding the use of restorative justice and trauma informed care in schools which includes non-punitive discipline models such as peer mediation, conflict resolution, truth and reconciliation committees, guidance counseling, mentoring, teacher training and support, and parental and community involvement initiatives, schools and school professionals are able to reduce conflict in schools, exclude use of police and police interventions and create positive and healthy school environments for the success of all students.

Reforming the current discipline policies and policing culture in New York City Public Schools is a necessary first step to ending the school to prison pipeline.

Join us by signing the petition that will be delivered to Mayor de Blasio.