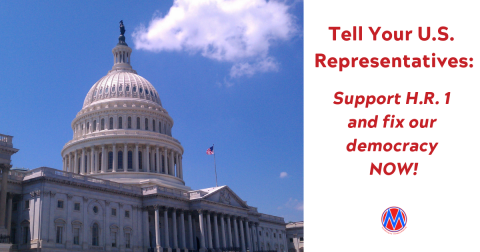 Quick Signature to Help Save Our Democracy!

Woot! This week we are celebrating the historic swearing in of more women and people of color than ever to the 116th Congress!! We are on a roll!

Who we elect has an impact on our lives, our community, and our country. So you know what’s next on our to do list? (Aside from ending the President’s very frustrating shut down of the government?)

Fixing our democracy to make sure that every vote counts in future elections!

Thankfully, in response to the appalling levels of voter suppression we saw in the last election, the newly sworn in U.S. House is introducing a sweeping democracy protection package as one of their first actions.

**Will you take a second to add your name to our petition to ask your U.S. Representative to make fixing our democracy a priority first step in 2019?

HR1 aims to fix our democracy by:

All of the above items are needed…. yesterday. And so is your signature.

→ Quick signature! Ask your U.S. Representative to make fixing our democracy a priority in 2019 and we’ll deliver your message next week!

And we know that if we want Congress to take on hard issues like childcare, gun violence prevention, health care, equal pay, and paid family leave, or the dozens of other things we need them to fix, we need a democracy that works.

This is our chance. Let’s make sure that every member of Congress knows that having a strong democracy is a priority for her or his constituents.

We need big fixes to our democracy ASAP. Sign on to tell your U.S. Representative to make fixing our democracy their priority as a first step in 2019.