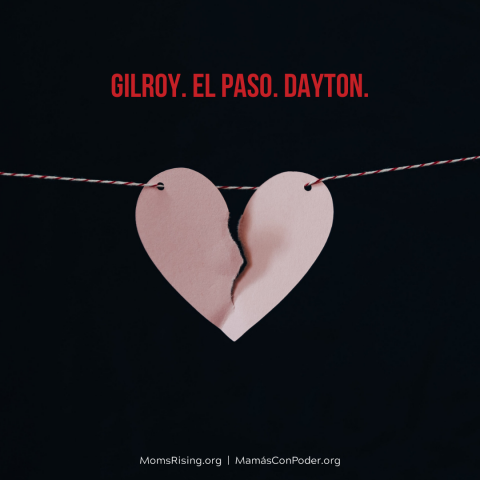 It’s a gut punch. An unimaginable horror. More than 80 people were killed or injured in two brutal mass shootings over the weekend.

Too many lives have been ended or forever altered. Too many mothers, fathers, sons, and daughters are mourning. There have been more mass shootings in our country than there have been days in 2019; many shooters have used military-style assault weapons, which must be banned; and in recent years white nationalist extremists have killed many more people in the United States than any other type of terrorist or extremist.

*The time to act is NOW! Urge your members of Congress to ban military-style assault weapons with high capacity magazines, pass the U.S. House gun safety bills on background checks and Red Flag laws, and to reject contributions from the gun lobby.

We mourn the victims in Dayton and El Paso and stand with all those affected by the senseless gun deaths and domestic terrorism that are devastating our communities virtually every day -- and we will not rest until the epidemic of gun violence and hate in America ends.

As we mourn those lost, we must address the deeply disturbing fact that these and other shooters may have been motivated by abhorrent white supremacy, white nationalism, bigotry, anti-immigrant hate, and misogyny. From the Muslim Ban and "Send her back," to "Build the wall" and family separation, President Trump’s dehumanizing racism and xenophobia emboldens those who commit hate crimes, including those who use military-style assault weapons with high-capacity magazines to terrorize and kill.

Make no mistake, the President’s hate-filled words and actions -- including his support and amplification of white supremacy, white nationalism, and anti-immigrant rhetoric on social media, at rallies, and more -- is provoking violence and weakening our country in profound ways. The El Paso shooter’s manifesto mirrored Trump’s shameful, wrong, and dangerous 'invaders' Facebook ads. Trump’s hate speech is leading to an increase in hate crimes: The FBI reports that hate crimes are on the rise; and hate crimes jumped by 226 percent in counties where Trump’s rallies were held.

White nationalism is domestic terrorism. It’s time for our leaders to call it out as such.

It’s also long past time for Congress to take significant action -- as well as stop taking campaign contributions from the gun lobby which has been standing in the way of common sense gun safety reforms. Specifically, the U.S. Senate must return from its recess and pass the gun violence prevention measures the U.S. House has already passed, including those relating to background checks and supporting “Red Flag” laws, which give every family the ability to temporarily keep guns away from loved ones going through a serious crisis before they hurt themselves or others; and both chambers must also act immediately to ban the sale of military-style assault weapons and high capacity ammunition. (And any legislative response to gun violence should never be tied together with racist and destructive anti-immigration laws, as President Trump suggested on Twitter this morning.)

*Urge your members of Congress to ban military-style assault weapons with high capacity magazines, pass the U.S. House gun safety bills on background checks and Red Flag laws, and to reject contributions from the gun lobby.

Enough is enough. We need our elected leaders to condemn hate and reaffirm their commitment to our democratic values of freedom and justice for everyone. And we need them to enact solutions NOW to stop our epidemic of gun violence.

→ Please forward this post around for more people to take action, and post the action link on your social media. The more of us who raise our voices, the faster we’ll see change happen.

*Here’s the action link again so you have it handy to use and share: https://action.momsrising.org/sign/gunsafety_senate_2019/?source=blog