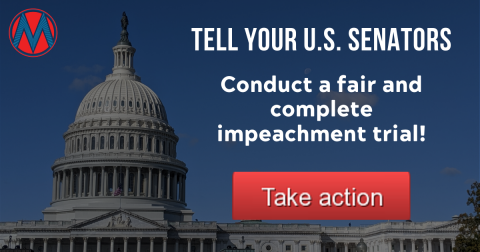 The evidence is clear: President Trump used taxpayer money and the promise of a meeting to try to obtain dirt from a foreign nation on a Democratic challenger in the 2020 elections for his own personal gain. After that, he obstructed Congress’ investigation into this abuse of power, blocking witnesses from testifying and ignoring Congressional subpoenas for documents.

Now, the Republican leaders of the U.S. Senate are up to no good—refusing to agree to consider witnesses and documents during the trial, and some are even attempting to change the rules of the Senate in order to dismiss the articles of impeachment before receiving them from the House.

→ This must stop. Sign on now to urge the U.S. Senate to conduct a fair and complete impeachment trial with witnesses and documents!

How can this help? We need to push the U.S. Senate to keep the impeachment process moving forward with a fair impeachment trial that includes witnesses and documents. America’s moms are counting on Senate leaders to protect our democracy by putting patriotism ahead of party.

Our children’s future is at stake. We deserve a President who will fight foreign influence in our elections—not invite it—and who will put the country’s interests ahead of his or her own. Every U.S. Senator owes it to our children to hold the President accountable for abusing his power for personal gain.

→ We must speak out to urge the U.S. Senate to conduct a fair and complete impeachment trial including witnesses and documents!

President Trump’s actions and subsequent cover-up threaten the integrity and security of our elections, our ability to have confidence in them, and the very foundation of our democracy. As moms, we know we must do better for our children—and for our nation.

Now, we need all U.S. Senators to put the country’s interests ahead of their own, to put patriotism over party, and to find the moral courage to stand against foreign influence in our elections and presidential corruption. That means honoring the oath they will take to be impartial jurors.

→ Join us in taking action to urge the U.S. Senate to conduct a fair and complete impeachment trial with witnesses and documents!