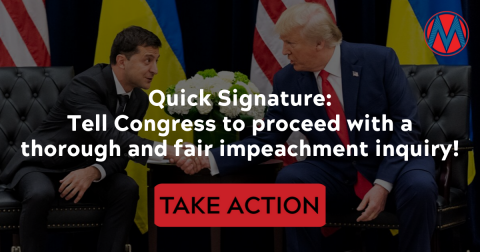 Quick signature: Tell Congress to proceed with a thorough and fair impeachment inquiry!

This. This is not more of the same Trump twitter chaos.

It’s tempting to tune out the regular barrage of shocking news coming from the White House these days. However, and this is a big however, this week’s revelations are something entirely different—and they have enormous gravity because they involve alleged abuse of America’s power for President Trump’s personal gain and they threaten the integrity and security of our elections.

This is not a drill.

The President of the United States should be fighting foreign influences in our elections—not inviting them in. Shockingly the transcript and whistleblower complaint released this week seem to show that President Trump more than abused his power in conversations with Ukraine's president to try to pressure Ukraine to collect political dirt on presidential candidate, Joe Biden.

America’s elections belong to America’s voters and no foreign government should play any role in determining the outcome—let alone be coerced by the President to do so! We must hold the President, and all leaders, accountable to the people.

This is a historically important moment to stand up not just for us, not just for today, but because the patterns we are setting now build the country our children will live in for future tomorrows—and we want our children to live in a fair democracy.

*Quick signature: Sign our open letter to Congress urging them to proceed with a thorough and fair impeachment inquiry.

As one of over a million members of MomsRising, I am writing to urge you to proceed with a thorough and fair impeachment inquiry of President Donald Trump.

The blatant and horrifying alleged abuse of power by the President, who took an oath to “preserve, protect and defend’ our constitution must be investigated by Congress to determine whether President Trump invited—or attempted to coerce—a foreign government into influencing our elections.

America’s elections belong to America’s voters, and no foreign government should ever play any role in determining the outcome. We demand the truth, and we demand elections that are free and fair. President Trump—and anyone who was complicit in these alleged abuses of power—must be held accountable.

*Sign now: Tell Congress that no foreign government should ever play any role in determining the outcome of our elections!

The whistleblower’s report alleges President Trump tried to use U.S. power and taxpayers’ money to coerce Ukraine’s president into interfering in our elections and, further, that his administration then tried to cover up these illegal, thuggish, self-serving actions. These actions must be thoroughly investigated. We deserve a president who puts the country’s interests ahead of his own, rather than desecrating our democracy.

Take action! Tell Congress that President Trump—and anyone who was complicit in these alleged abuses of power—must be held accountable.