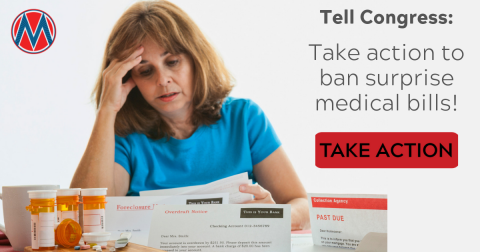 **But dark money from provider groups is pouring into ad campaigns to stop it, so we need everyone to speak out to support this bipartisan legislation.

How do surprise medical bills happen? Most often, someone receives a surprise medical bill after receiving treatment from a provider who is out-of-network during emergency care or receiving care at an in-network facility by an out-of-network practitioner. The Journal of the American Medical Association found that over 40% of emergency room visits end in patients getting out-of-network bills. Forty percent! These bills can be catastrophic for some families, putting them at risk for financial ruin and bankruptcy.

As one of over a million members of MomsRising, I am asking you to pass strong legislation to ban surprise medical bills and protect millions of families from economic insecurity and stress.

Surprise medical bills most often occur when someone receives treatment from a provider who is out-of-network during emergency care or receives care at an in-network facility by an out-of-network practitioner. These surprise bills occur across the health care settings and can cause financial catastrophe for families.

Victory on surprise bills will require a sustained effort from people like you, holding our elected leaders accountable to the people, not industry.