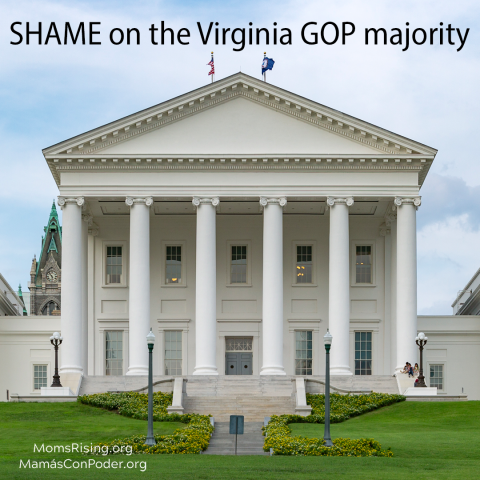 Virginia is my home, and I am heartbroken over the mass shooting over the weekend at the Virginia Beach Municipal Center that killed 12 and injured at least four others.

I am also furious that year after year, during the legislative session, the Republican majority in the General Assembly blocks every attempt to improve gun safety -- literally, every single attempt.

Please help me say SHAME on the Republican majority in the Virginia General Assembly - and urge them to take action on gun safety for Virginia.

It’s beyond time for them to take action to advance public safety. Too often they do just the opposite. In fact, just this January, the GOP majority blocked a bill to ban sales of large-capacity magazines that could have mitigated the scale of the Virginia Beach tragedy.

Every year on average, more than 1,000 Virginians die from gun violence. The Virginia Tech shooting in 2007, when 32 students and educators lost their lives and another 23 were injured, was the worst school shooting in U.S. history. Yet Virginia lawmakers have taken zero action to reduce gun violence.

Take action now and say SHAME on the Republican majority in the Virginia General Assembly - it’s time for them to take action on gun safety.

Virginia’s Republican lawmakers never break ranks when it comes to resisting policy reforms to improve gun safety. One reason why is because the National Rifle Association (NRA) and other even more extreme gun groups are headquartered here, and they work hard to maintain their grip on Virginia’s conservative leaders.

But over the last few election cycles, the GOP majority has dwindled to just two seats in both the State Senate and House of Delegates as pro-gun-safety legislators have replaced them. The time is right to break the gun lobby’s grip and convince GOP lawmakers to finally take action on gun safety.

Help Virginia become a model for other states as it breaks the grip of the gun lobby. Shame the GOP majority now, and don’t forget to take a moment to tell them to take action on gun safety for their state.

Together, we will never stop fighting for the safety of our families and communities.