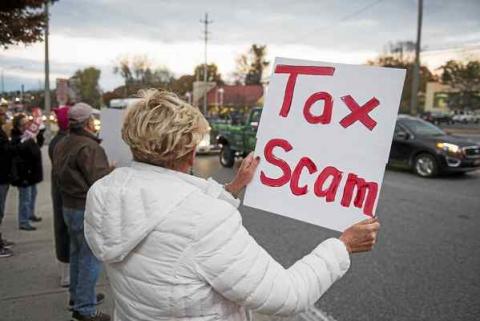 We will NOT foot the bill for tax cuts for millionaires, billionaires, and wealthy corporations. SIGN OUR LETTER telling the U.S. Congress to repeal the Trump Tax Scam!

It’s tax time and we are getting an angry earful from moms around the country about Trump’s backwards tax scam— and need your help letting Congress know what’s going on in the real lives of families in our nation:

“My taxes have gone up due to the cap on state and local taxes. Now it does not pay for me to deduct these taxes, along with my charitable donations and union dues. The doubling of the standard deduction is not adequate to make up for this, especially since I can no longer take personal exemptions. I have a 20 -year old college student who I can no longer get an exemption for, except for a measly $500. In addition, I am a part-time librarian, so barely middle-class, and my taxes are now higher. Thanks, Trump!”-Debra

“The Trump Tax Scam is going to cost me thousands more dollars as I won't be able to deduct my expensive medical deductions (around $10,000/year) -- it's time for the rich to pay their fair share of taxes!”-Donasue

Sound familiar? Simply put, our families are getting screwed by the Trump Tax Plan (aka the Tax Cuts and Jobs Act, aka the Trump Tax Scam).

The Trump Tax Scam cost around $2 trillion as it moved money from working families to the already wealthy. Not good. The fact is, the biggest corporations have too much power over our government and have been wielding that power to get humongous tax breaks while our families walk away with crumbs— or even worse, pay for those tax cuts in slashes to healthcare nutrition, and education funding, as we saw earlier this week when President Trump introduced his budget. The Trump budget calls for trillions of dollars in cuts to healthcare, nutrition, childcare, education, and housing programs. [2] It’s no coincidence that the Trump Tax Scam also cost around $2 trillion. Our families are left out of the tax cuts that the 1% and Wall Street are getting AND we are expected to foot the bill by seeing cuts to important programs like Medicaid, Medicare, SNAP, and childcare assistance.

We will NOT foot the bill for tax cuts for millionaires, billionaires, and wealthy corporations through cuts to programs that boost our families healthcare, nutrition, and education.

We say NO WAY!

The Trump-GOP Tax Scam is still wildly unpopular, especially among women—only 30% of women in the U.S. approve of the law. And a majority of people say the law hasn’t improved their families financial situation, like the Republicans promised when they passed the law on a partisan basis in December 2017. [3] We imagine this point of view will only increase as more and more families file their taxes this year (the first year the law is in full affect) and see that they are owing money to the federal government rather than getting the refunds they were counting on. [4]

This horrible, terrible, no good, very bad tax plan is hurting us and hitting us in the wallet. Low-income families especially rely on their tax refunds to help with expenses throughout the year. In fact, 27% of those polled say they use their tax refund to pay off debt and 9% put their refunds towards a savings account. [5] We also hear from many moms who say they use it for childcare or summer care when school is out, to pay the mortgage or a car payment, to pay for medicine for their kids, and to help pay tuition for older children.

We don’t want this tax plan. We never did!

Meanwhile, the U.S. budget deficit has ballooned to record levels, from $201.8 billion in 2017 to $305.4 billion in 2018, increasing the Republicans’ motivation to neglect investments or slash expenditures even further that benefit the public, from infrastructure improvements to healthcare to education. [6]

Even if you are one of the families seeing a small increase in your tax refund, it’s temporary crumbs compared to the trillions (yes TRILLIONS) of dollars in permanent tax cuts the Trump-GOP Tax Scam has given away to mega-corporations! And what are those mega-corporations doing with their tax cuts? They certainly are not passing it onto their workers by creating higher wages or hiring more employees. Corporations are giving huge windfalls to their CEOs and wealthy shareholders in the form of stock buybacks instead. And who does the stock buybacks benefit? The wealthy of course— who have already seen a windfall in tax breaks from the Trump-GOP tax plan.

**Speak up now and sign our letter to Congress calling on them to immediately repeal the Trump Tax Scam!

We need to put the pressure on Congress to get rid of the Trump Tax Scam and replace it with something working families actually need. In order to do that we’ll need as many people taking action as possible. After you sign our letter make sure to forward this email to your friends and family and post our action link to Facebook.

Thank you for speaking up for working families and speaking out against the Trump Tax Scam!