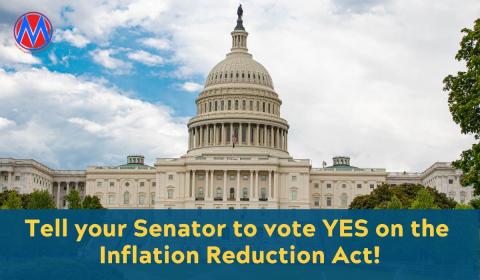 Finally, some great news! The U.S. Senate has come to an agreement on a bill that will rein in Big Pharma’s price gouging, help millions of people keep their health insurance, tax mega-corporations, and lower carbon emissions.

What’s happening? This week, the U.S. Senate is set to vote on the Inflation Reduction Act of 2022, a massive tax and investment plan, that will help make our tax system more fair, support and build up the health care of underserved communities, and tackle the climate crisis!

The proposed legislation will be a historic win for families and our future! It tackles some critical issues:

There’s great momentum happening RIGHT NOW to get this bill passed, let’s keep it going! Add your name to tell your Senators to vote YES on the Inflation Reduction Act!

It has been a long, hard road to get here and even after this bill passes, the fight will continue. (Of course!) We are so grateful for the hundreds of thousands of actions our MomsRising members have taken to push this Congress to make big, monumental change—and we will keep fighting for families together. We still need to make major investments in childcare, maternal health, home care, the Child Tax Credit, and paid family and medical leave, as well as closing the Medicaid gap and protecting immigrant families, who are critical to our care infrastructure and communities.