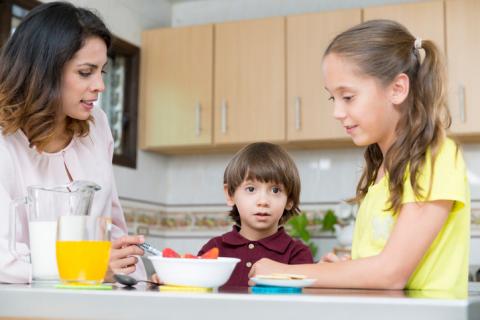 Sign our letter to your U.S. Senators now saying vote “YES” on the good Farm Bill and protect SNAP!

I know the world feels chaotic right now with everything happening on the news (not to mention getting your kids ready for summer!) —and there’s a lot to keep track of. It’s easy to feel down and helpless. But that’s why MomsRising is here—to remind you of how powerful your voice is and what a difference speaking out makes in the lives of millions of families, including your own!

One of the things we need you to speak out on this week is protecting the Supplemental Nutrition Assistance Program (SNAP/food stamps) in the Farm Bill. We have some good news: The U.S. Senate heard your outcry against the horrible, terrible, harmful U.S. House GOP Farm Bill that guts SNAP (which failed to pass last month but just passed by a narrow vote today), and instead, they are taking a totally different approach. They have proposed a bi-partisan bill that protects SNAP. [1] Woohoo!!! Let’s keep the momentum going in this direction!

***SIGN our letter to your U.S. Senators now saying vote “YES” on the good Farm Bill and protect SNAP!

Here’s what’s going on: The U.S. House GOP leadership refused to listen to moms, dads, and other constituents who have been loudly speaking out against their destructive Farm Bill, which takes away SNAP from millions of families and enforces strict work requirements. [2] Despite the fact that the Farm Bill was defeated on the floor of the U.S. House in May, they just passed this awful bill in the U.S House. It has already been said though that it is dead on arrival in the U.S Senate, since the U.S Senate has a much better bi-partisan bill, which protects our families and economy. So this fight isn’t over, and we need to build momentum for the good bill that’s in the U.S. Senate.

The good news is all your calls, stories, letters, and outcry to protect our families nutrition and our economy was heard in the U.S. Senate. The U.S. Senate, led by Senators Debbie Stabenow (MI-D) and Pat Roberts (KS-R), introduced a bi-partisan Farm Bill, which not only protects SNAP but also creates positive policy for farmers, the environment, families, and our economy. [3] Exactly what a Farm Bill should do! The U.S. Senate is expected to vote next week on their good bill. We want to send a strong message to our elected leaders that we want them to reject any negative amendments that would take food out of hungry families’ refrigerators or create overly onerous barriers to accessing nutrition.

We can win this if we speak out! We need the U.S. Senate Farm Bill to pass in order to send a strong message that this is the type of policies that Congress should be passing overall: They should be protecting our families' nutrition and health and boosting our economy, not harming families to win political points!

***Sign our letter NOW telling U.S. Senators to support the good Farm Bill and reject harmful amendments that would impact struggling families and our economy!

SNAP is a major lifeline to millions of families around the country. In fact, SNAP helps 1 in 8 Americans across the country afford groceries, including the 1 in 4 children who live in food insecure households. [4] SNAP also lifts up families in communities across the U.S.: 36% of SNAP recipients are white, 25% are Black, 17% are Hispanic, and 3% are Asian. [5] Families using SNAP live in every district in the United States, so our elected leaders have no excuse to not speak up for their very own constituents.

And perhaps most important is the fact that the majority of SNAP recipients already work! Fact: Most adults on SNAP work. More than half of SNAP households with at least one working-age, non-disabled adult work while receiving SNAP — and more than 80 percent work in the year before or after receiving SNAP. [6] Among those who are not working, most report illness or disability, caregiving responsibilities, being recently divorced or escaping an abusive relationship, or going to school as a reason for not working.

The U.S. Senate has a chance to stand up for SNAP, our families, and our economy by passing their bi-partisan Farm Bill next week! Let’s get a win!

Let’s have some positivity during these difficult times!

Join us in speaking out by adding your signature to our letter to the U.S. Senate on SNAP and the good Farm Bill (we’ll deliver it next week to your Senators in DC)!

We need to break through the noise and get as many people as possible to sign our letter, so after you add your signature forward this email to your friends and family and post our action link to Facebook.

Thank you for being a powerful voice for our families and economy!

P.S. Want to learn more about how important SNAP is to children? Join us for our #FoodFri tweet chat at 1pm ET on June 22nd with special guests Food Research and Action Center (FRAC), First Focus, and Share Our Strength. (Just use #FoodFri)

P.P.S. We released a new video today in the lead up to the House vote on SNAP. Check out Washington State mom Tina's story.

Sign Our Letter: Tax Credits for Working Families NOT Mega-Corporations!