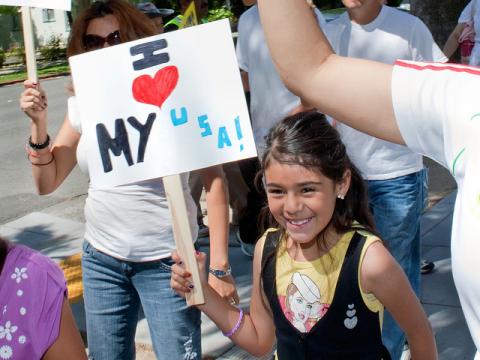 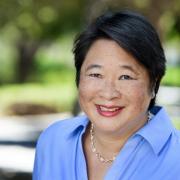 Imagine you were in danger right now. Imagine you are in a place far from home. Imagine you have no money, and no friends or family that you can reach.  Can it get any worse? Yes. Now imagine that a stranger in a uniform tore your young child from your arms without explanations or reassurances about where either of you were going or what would happen to you. You hear your daughter screaming and sobbing as they drag her away. Then they put you in a locked cage and you can't leave, go home, call friends, and all you want is to find your child. You imagine it must be even worse for your baby who is even more confused and lost than you are. You cry, you scream, you beg for answers, and your captors ignore you.

There are two legal ways to enter this country legally:

1. You go to the American Embassy or consulate in your country and fill out forms, provide evidence, and appear in courts. It's a process that can take years and hundreds if not thousands of dollars. This law is to insure that people coming to this country can work, or be taken care of and are not a burden to society. It's for relatively rich immigrants.

2. The other way to get into this country is to seek political asylum. To do this you must present yourself at the border and make a claim that you wish entry because you are escaping illegitimate persecution in your home country. This may be civil violence, discrimination based on gender, religion, nationality or group membership, political harassment and a number of other reasons. Under these laws you are supposed to gain immediate entry and protection, followed by an evaluation of those claims, during which time you are free to live and work in the US pending a decision.

People without resources or who fall outside these categories have been breaking the law for years to enter the US. They travel across the border on a visitors visa and don't go home when it expires, or simply find a break in the border and transport themselves over, blending into America for work, school, or to join family members. If they are caught they return home. In fact many return home regularly or send money home to support their families. These illegal immigrants have crossed our borders for years and there is no clear evidence that they have burdened our society.

In fact many people believe that their labor is responsble for keeping food costs low. They tend to take jobs in agriculture and domestic labor that Americans who are born here are not attracted to because of the hard physical labor they entail. There is no evidence they are on welfare in greater numbers, indeed it would be hard to apply for welfare without documentation. They use their money to buy food, clothing, phones, televisions, houses, cars and more, thus expanding the US economy.

The US has been living with the dirty open secret of illegal immigration for years. Some leaders have always wanted to eject illegal immigrants on the justifiable principle that they are breaking the law. Other leaders recognize that illegal immigrants are, except by legal definition, upstanding members of our society, but can be shamefully exploited because they lack legitimate legal status. To gain legitimacy  for immigrants these leaders would have to push for amnesty, registration, and a faster track to citizenship. The entire leadership until now has been guilty of allowing a legally insufficient state of affairs to remain and grow.

The way that the Trump administration is currently enforcing immigration laws is illegal, inhumane, and against the moral foundations of the United States of America. There is a process for handling political refugees and illegal immigrants and the Trump administration is ignoring that process and intentionally creating a scene of such agonizing pain to discourage future refugees and  immigrants to reconsider. How have we allowed this illegal brutality to happen on our watch?

Against the dominant narrative of immigrants as the lifeblood of our country Trump and his sympathizers have painted immigrants, particularly those with brown skin, as dangerous, criminal, parasitical, and possible terrorists.  Immigrants are the Willie Horton in Trumps bag of fear tactics. Yet there is no systematic evidence to support this. If there were, we would be hearing a lot more about the Marelito boatlift.

For those who view the 80's as an ancient or forgotten history, in the 1980’s, Fidel Castro, the communist leader of Cuba, suddenly declared that anyone wishing to leave Cuba could leave from the port of Marelito for a short period of time, provided that they could find transport off the island.  The Cuban American community in Florida responded by sending flotillas of boats to Cuba  resulting in 125,000 Cuban refugees flooding the Florida coast over a period of days. The Cuban government announced they were dumping violent criminals, AIDS patients, and mental health hospital inmates onto American shores as a weapon to destabilize our society.

Americans and nativists were in an uproar and caused a political crisis for then President Jimmy Carter who rushed to deal with the social and economic crises this influx might cause. Predictions of drug addicts, gays, and prostitues bringing catstrophic effects on the resources and working class communities of Florida were predicted. Yet decades after the boatlift economists have failed to find clear evidence that the arrival of these Cuban refugees depressed wages in the labour market, nor evidence of  the other major crises that were predicted. Critics tend to discount the increased consumption that refugees bring to new homes, or the high rate of entrepreneurship immigrants bring. Those who have to work for the opportunity to come to America bring outsize dreams and an enthusiastic willingness to work hard and for long hours to achieve their ambitions. America proved then, and can prove again that it is quite good at absorbing refugees from other countries, even when they arrive under the worst conditions--unexpectedly, with the clothes on their back and en masse.

The fear of immigration is without a broad basis in fact. The Gallup poll in June found that the majority of Americans think immigration is a good thing. Americans believe that immigration is what has made the United States diverse, free, and innovative. These polls  suggest that the electorate supports immigration, and if we could adopt policies to normalize the status of current illegal immmigrants our political, legal, and moral problems could disappear.

Yet this conversation isn't happening because there is nothing that this administration seems to like more than a military response. Right now conservatives are successfully lobbying to create a militarized zone along our 2000 mile long southern border. They want to put up a wall that could cost 700 billion dollars and 150 million a year to maintain. These leaders have clearly learned nothing from the failed policies leading to the construction of the Great Wall of China. Long borders are impossible to physically defend. And speaking of a drain on resources, spending nearly a trillion dollars on building a wall would go a long way towards helping restettle political refugees, leaglizing immigrants, and helping spur entrepreneurship within these and other working American communities.

Why should the US seek to deport business owners, former soldiers, or those who have already settled successfully in the US? Indeed these persons can provide positive cultural networks and role models for new migrants. There are a number of alternatives to the proposed and current costly programs of criminalization, deportation and militarization. Once those police forces are constructed they will never go away. Every year they will automatically seek more money, and each year they will justify it by reanimating the demons of illegal immigration.

Call and write to your political leaders to stop the militarization of our borders. Make immigration fast and legal. Whether you support limited or full immigration, the important thing is to push back against the build up of arms and invest in the future growth of America, not in its moral and economic decline.