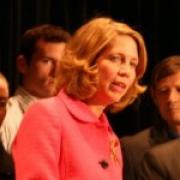 Lori Haas
Share This
Add your voice to the comments

Like so many other Americans, I remember exactly where I was when I learned about the horrific mass shooting at Sandy Hook Elementary in Newtown, Connecticut.

I was home that day in Richmond when my phone rang.  It was Lynnette Alameddine on the line.  I could tell immediately she was in tears.

Lynette and I have cried together before.  Her son Ross was murdered during the Virginia Tech massacre in 2007.  He was just 20 years old.  My daughter Emily, who was in the same classroom with Ross that day, was shot twice in the head.  But I am blessed.  Emily survived and recovered fully from her injuries.  Lynnette and I have been close ever since—as many of the surviving family members are.  There is consolation in such company, but it is a fraternity that no one would ever want to join.

When Lynette and I spoke after the news of Newtown broke, she was upset about something very specific.  “Lori, these parents, they won’t be able to see their children, to hold their children, for maybe a day or more!”  She was referring, sadly, to the 20 children who had been murdered at Sandy Hook.  She knew the school would be cordoned off for some time as authorities combed over every inch of the crime scene for evidence.  Then the bodies would be taken to the morgue, processed.  Only then would the parents be called in to identify their remains.  Only then would they be able to hold their babies one last time and say goodbye.

Can you imagine having your child shot and killed and then having to endure the agony of not being able to see them for that length of time?

It’s tragic to even have to ponder such a thing in this great country, the Leader of the Free World.  “Life, Liberty, and the pursuit of Happiness”?  For too many, that promise is being denied because of weak gun laws that give dangerous individuals easy—and often legal—access to firearms.

We can do better.  On the sixth-month anniversary of this terrible tragedy, let’s all vow to work harder to enact sensible gun laws—at the local, state and federal level—that will prevent future tragedies.  No parent should ever have to embrace, and bury, a bullet-ridden child.