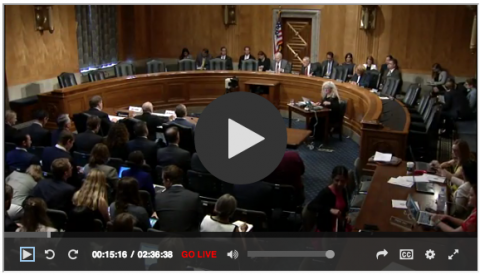 On Aug. 16, the Senate Homeland Security and Government Affairs Permanent Subcommittee on Investigations held a hearing on what federal agencies are doing – or rather, aren’t doing enough of – to protect unaccompanied migrant children from abuse and human trafficking once they enter the U.S.

Witnesses from the U.S. Border Patrol, U.S. Immigration and Customs Enforcement (ICE), Department of Health and Human Services, and the Department of Justice were questioned by senators about their agencies’ role in keeping these children (“Unaccompanied Alien Children,” or “UAC” in government-speak) safe, both while they are in U.S. custody and after they are released to an adult. Many of the most heated exchanges took place between a number of senators and Jonathan White of the U.S. Public Health Service Commissioned Corps. Commander White formerly served as Deputy Director of HHS’s Office of Refugee Resettlement, the agency charged with caring for unaccompanied children, and is now assigned to the HHS Office for Preparedness and Response. Senators grilled Commander White over the agency’s failure to keep track of immigrant children after they leave government custody; recently, officials were unable to determine the whereabouts of nearly 1,500 of the more 7,600 than children who were released from U.S. custody from October to December 2017.

White repeatedly made the case that the Office of Refugee Resettlement (ORR) and its parent agency, the Department of Health and Human Services, do not have the authority to oversee children after they exit ORR care. Several senators, including Subcommittee Chair Rob Portman (R-OH), vehemently disagreed, asserting that ORR does in fact have the authority from Congress, and that ORR is falling short in its mission to protect immigrant children once they leave detention shelters. Sen. Heidi Heitkamp (D-ND) also pushed back hard when Commander White said that his agency provided “excellent care” for the children while they were in ORR’s custody, citing recent reports of children suffering physical, psychological, and sexual abuse while in U.S. detention centers.

The hearing came a day after the subcommittee’s top Republican and Democrat Sens. Rob Portman (R-OH) and Tom Carper (D-DE) jointly released a report outlining how HHS and other government agencies are falling short when it comes to keeping immigrant children safe after they are turned over to adult sponsors. The report cites failures throughout the federal government. In addition to repeating the finding that ORR was not able to verify the whereabouts of about 20 percent of children three months after they were placed with sponsors, the report says that HHS has “directed its legal service grantees to cease providing legal representation to new UACs placed with sponsors because it believes its authority to provide such services is ‘shaky.’” With less legal representation, more children are failing to appear for immigration court dates. Backlogs in court are growing; more than 8,000 unaccompanied children cases have been pending for more than three years. The Department of Justice has funding to hire 129 additional immigration judges and has not done so. Migrant children with significant mental health problems have been placed in inappropriate facilities. Children remain in placements longer than they should because of administrative delays, according to the report.

The report recommends that HHS acknowledge its legal responsibility to ensure that children placed with sponsors other than parents remain safe from abuse, and that if HHS does not, Congress should pass legislation clarifying HHS’s role. Among other recommendations, the report also calls for HHS to enlist more pro bono attorneys to represent these children, and urges the Department of Justice to hire all 484 immigration court judges that Congress has authorized.

Both the Obama and Trump Administrations have seen their responsibility for unaccompanied children as ending after placement in the community. In this view, child welfare and criminal justice agencies in states and localities are expected to identify abuse or trafficking, just as they would for any other children. At a time when child welfare systems are overwhelmed with families afflicted with substance use crises, all levels of the systems responsible for children need more resources. So far, those resources are not forthcoming. The report calls for no more funding – even calling on HHS to find more lawyers willing to donate their time.

While the problems surrounding keeping immigrant children safe from abuse and trauma are not unique to the Trump Administration, they were certainly exacerbated by the recent decisions this administration made to separate children from their parents at the border. According to the subcommittee’s report, as of August 9 of this year, HHS was housing 11,423 unaccompanied children. Children staying in the care of HHS remain there on average 41 days, until they are placed with parents or other sponsors. Adding approximately 2,500 children who had been separated from their parents to the rest of the unaccompanied migrant children would have put significant pressure on the facilities HHS contracts with to provide adequate care. Further, the new agreement between HHS and DHS to fingerprint every adult in the household and to share information has prevented some undocumented relatives from coming forward to take in the children, at the same time that the “zero tolerance” policy has incarcerated more parents, so their children cannot speedily be returned to them.

Some subcommittee members were “sickened” by what is happening to children in federal custody. And while Commander White asserted in this hearing “when they’re in our care they’re safe,” at an earlier hearing, he agreed that taking children from parents was harmful. He said then, “There’s no question that separation of children from parents entails significant potential for traumatic psychological injury to the child.”

You can click here to watch a recording of the hearing and read the written testimony of the witnesses and members of Congress.