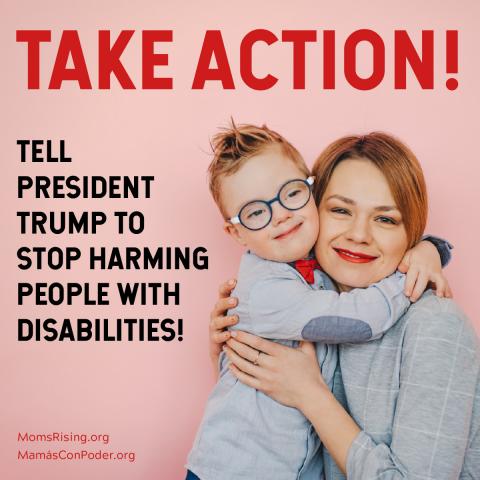 I’m always taken aback by the cruelty of President Trump’s proposals and this time is no different. He is proposing changes to disability insurance (SSDI and SSI) that would impact an estimated 2.6 million people with disabilities, many of whom are children!

“My son is on the autism spectrum, he has other health issues that limit what he is able to eat, and he has horrible anxiety. He’s never been able to attend a regular school—we had to pull him out at the age of 7 because he would get so anxious and have hallucinations. On top of that, I have serious health issues. I have had 7 back surgeries and I’m on 19 different prescriptions. I’m a fall risk. I’m in bed a lot. I have blurry vision, narcolepsy and Behcet’s Disease (an autoimmune disease). I worked as a therapist but eventually had to close my practice. My husband works from home so he can take care of us but because of that he can’t advance in his career. I started applying for disability and was denied twice. Then I got a lawyer and it took forever for me to get a hearing and eventually get approved for disability insurance. SSDI got us to the point that we weren’t terrified all the time. We can breathe. If we lose it I don’t know what we will do. I’m terrified by President Trump’s proposal quite honestly.”

Every child, no matter whether they have serious health conditions or disabilities, should be able to pursue their dreams.

***SPEAK OUT NOW to protect our children by signing our letter saying “NO!” to Trump’s most recent attack on people with disabilities.

Here’s what’s going on: In November, the Trump Administration proposed a federal rule that would require millions of people with serious health conditions and disabilities, including parents and caretakers of children with disabilities, to undergo more frequent reviews (called continuing disability reviews or CDRs) of their medical conditions in order to receive their Social Security Disability Insurance (SSDI). It is estimated that this change could impact 2.6 million people with disabilities. $2.6 billion over the next decade will be cut from the two core programs that comprise the disability safety net: Social Security Disability Insurance (SSDI) and Supplemental Security Income (SSI) leading to hundreds of thousands of people possibly losing their disability insurance.

Applying for SSDI and SSI and going through the review process is already hard enough as it is. Only about four in ten applications are approved and it takes as long as two years, after multiple layers of appeals, to get approved for benefits. Many people need to turn to expensive lawyers just to get the paperwork together and approved by the Social Security Administration. And a shocking 10,000 people die each year just waiting to get accepted into disability insurance.

Sign our petition now! Say “No!” to the Trump administration’s changes to disability insurance.

Adding more frequent reviews won’t help people with disabilities, it won’t magically help them get or keep a job. And it certainly won’t help children dealing with illnesses and disabilities like Downs Syndrome, cancer, Cerebral palsy, bipolar disorder, autism, or Cystic Fibrosis be properly cared for by their parents if they are forced off of disability insurance and must search for work in an uncertain job market. The proposed changes will only create an increased administrative and financial burden on families who will need to collect more paperwork, attend more medical appointments in order to prove they qualify for disability insurance, and take on additional unforeseen additional costs. Low-income families will especially be harmed by these proposed changes. People should not lose their benefits—and therefore an important financial lifeline—because of bureaucracy!

Join us and speak up now for millions of people, including children, with disabilities!

***SIGN our letter saying “NO!” to the Trump Administration’s changes to disability insurance!

President Trump has used the federal rule process time and time again to cut programs that lift families in order to pay for tax breaks for billionaires and big corporations...all without the approval of the U.S. Congress. First he went after immigrant families, then food stamp recipients, and now the disability community.

We have until January 31st to collect as many signatures as possible to speak out against this immoral and cruel attempt to cut hundreds of thousands of people, including children, off of disability insurance. After you sign our letter, forward this email to your friends and family, post about this on Facebook —including in any parent Facebook groups you are in, and help us speak out! We’ll be delivering our letter to the Social Security Administration next week. We need as many signatures as possible speaking out against this awful rule!

When we have each others’ backs—by ensuring that those of us who are struggling with health conditions and disabilities have the support we need—we make this a nation we’re proud to call home. Thank you for continuing to speak up for ALL of our families!

P.S. Thank you to Rebecca Cokley at Center for American Progress and our friends at Little Lobbyists (who connected us with Kara) for their guidance on this important issue.

P.P.S. To learn more about this issue please check out this fact sheet.