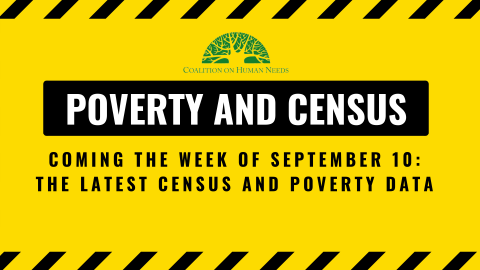 Progress in Fighting Poverty Slows -- And for the First Time in Years, the number of Uninsured Americans Does Not Significantly Decline

After years of progress, the decline in the poverty rate slowed between 2016 and 2017, according to U.S. Census Bureau statistics released Wednesday. In 2017, the official poverty rate was 12.3 percent, down from 12.7 percent in 2016.

While workers were earning more, substantial numbers remained at levels where it is hard to make ends meet. Near-poor people (below 200 percent of the official poverty line, or below about $25,000 for an individual in 2017) make up just below 30 percent of the population.

This analysis comes from the Census Bureau’s Supplemental Poverty Measure, which adds the value of in-kind benefits, such as SNAP/food stamps, school lunches, housing assistance and refundable tax credits.

“The increase in people with jobs and the help of tax credits and other assistance has helped millions of people escape poverty,” said Deborah Weinstein, Executive Director of the Coalition on Human Needs.  “But the Trump Administration and some in Congress have called for big cuts in some of the programs most effective at reducing poverty, including SNAP and housing assistance. Make no mistake: If these programs are cut, in the coming years, we will see a reversal of the progress we have made in fighting poverty.”

Weinstein noted that race plays a disproportionate impact on who is poor and who is not. Among non-Hispanic whites, the poverty rate is 8.7 percent; among blacks, it is 21.2 percent, and among Hispanics (any race) it is 18.3 percent. And children remain disproportionately poor: 10.9 percent of non-Hispanic white children live in poverty, compared with 28.3 percent of black and 25 percent of Hispanic (any race) children.

After years of progress, the percent of Americans covered by health insurance essentially flat-lined, with 8.8 percent of the U.S. population uninsured. Ominously, the uninsured rate decreased in just three states but increased in 14 states – the first time since 2013 that any state saw an increase in its uninsured population. That may be evidence that the Trump Administration’s repeated attacks on the Affordable Care Act are beginning to have an impact. “The Affordable Care Act has helped millions of Americans achieve coverage, but if you look at Medicaid expansion states and states that did not expand Medicaid, it really is a tale of two Americas,” Weinstein said.

The data found that the uninsured rate for 19-64 year olds in states that did not expand Medicaid was 16.7 percent, while the uninsured rate in states that did expand Medicaid was 9.4 percent. Close to one in five Americans were covered by Medicaid in 2017, up from 17.5 percent in 2013. “Medicaid’s success in reaching Americans who need it is all the more reason why more states should expand Medicaid, and Congress should reject the Trump Administration’s moves to set up bureaucratic hurdles meant to deny Medicaid to millions of people.”

Click here to view CHN’s “First Look at Poverty and Health Insurance: Progress Slows for People in Need and Uninsured Americans,” a chart detailing some of the statistics released today by the U.S. Census Bureau.