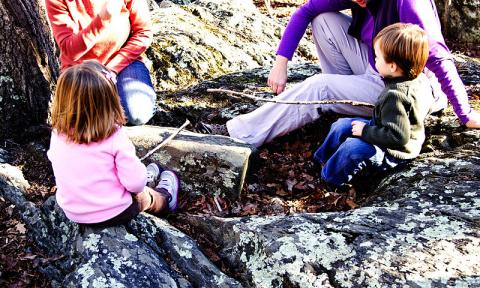 This post, authored by Rt. Rev. V. Gene Robinson originally appeared on TalkPoverty.org. The intersection of LGBT people and poverty is a largely overlooked reality.TalkPoverty.org is dedicated to demonstrating that we know how to dramatically reduce poverty; we just need to build the political will. Make sure to like TalkPoverty on Facebook and follow us on Twitter!

No, that’s not a statement of sympathy for a discriminated minority – but rather a subsection of that minority which gets little notice. The intersection of LGBT people and poverty is a largely overlooked reality.

Cameron and Mitchell, Modern Family’s much beloved gay couple, live in a lovely home and not only have the resources to adopt an Asian child, but the time to dote on her. Neil Patrick Harris and his husband in real life, David Burtka, have two adorable twins, and presumably the resources to hire nannies to watch the children while they pursue their careers. Judging from gay couples in the media, one might be tempted into believing that LGBT people are all thriving and reasonably affluent — not to mention overwhelmingly male and white. Nothing could be further from the truth.

An extraordinary report, New Patterns of Poverty in the Lesbian, Gay, and Bisexual Community, by M.V. Lee Badgett, Laura Durso and Alyssa Schneebaum from the Williams Institute (UCLA School of Law), presents a much more complete and accurate view of lesbian, gay and bisexual (LGB) people and families than the one that resides in most people’s minds.

The authors note that in reality same-sex couples are more vulnerable to poverty than married couples who are different-sex. Children of same-sex couples fare even worse—they are almost twice as likely to be poor than their peers in different-sex couple households. The most vulnerable of all are African-American children in gay male households—they have a poverty rate of more than 52 percent—higher than any children in any other household type. Children living with lesbian couples are also struggling with a poverty rate of nearly 38 percepnt—this compared to a national child poverty rate of approximately 20 percent (also atrocious).

The report authors point to some of the reasons so many LGB families are living on the brink, including, “susceptibility to employment discrimination, higher rates of being uninsured and a lack of access to various tax and other financial benefits via exclusion from the right to marry.”

The numbers of LGB parents raising children (biological, adopted and step-children) is not small—and they are not mostly from coastal metropolitan centers no matter what pop culture and the media might lead you to believe. In fact, the states with the largest concentrations of LGB couples raising children—between 22-26 percent of all LGB couples in these states—are Mississippi, Wyoming, Alaska, Idaho and Montana.

Yet most of these states do not currently have marriage equality and its attendant benefits for married couples and their children. In every state except for Florida, Maine and the District of Columbia, between 15-22 percent of LGB couples are raising children. So this is clearly not just an urban phenomenon. Indeed, as reported in the New York Times, “the data show, child rearing among same-sex couples is more common in the South than in any other region of the country… Gay couples in Southern states like Arkansas, Louisiana, Mississippi and Texas are more likely to be raising children than their counterparts on the West Coast, in New York and in New England.”

It is very difficult to separate the effects of being LGBT and poor from the additional factors of race and gender. All of these factors come together in a perfect storm which increases the likelihood of poverty among LGBT families raising children.

“These data further indicate the need for public policies that aim to support families with children in achieving educational and economic goals in ways that simultaneously support racial/ethnic and sexual orientation equity,” said Wilson.

There are several ways in which Congress could help remedy this situation. States could pair Medicaid expansion (23 states currently do not have it) with a raise in the minimum wage to $10.10. Congress could expand and strengthen both the Earned Income Tax Credit (EITC) and the Child Tax Credit (CTC). Poor LGBT people would especially benefit from legislated protections and non-discrimination policies in the workplace.

It is time we stop thinking of the LGBT community as mostly white, affluent, gay males, and begin to recognize how the interlocking oppressions of race and gender affect our LGBT community and conspire to make our poverty rates higher than the norm, especially for those of us raising children. We need a deeper exploration of how sexual orientation, race and gender intersect, if we are to combat the poverty that – perhaps surprisingly – pervades much of our community.

The Rt. Rev. V. Gene Robinson is a Senior Fellow at the Center for American Progress, Washington, DC, and the former Episcopal Bishop of New Hampshire.  Follow him on Twitter @BishopGRobinson.