Pink slime is on the run!

You did it! Thousands of MomsRising members joined the chorus of concerned consumers about the presence of pink slime, also known as “LFTB” (lean, finely textured beef) in cafeterias, restaurants and supermarkets. Your voice made the difference and major changes have been made within corporations and the government affecting the food our families eat. In a matter of days: 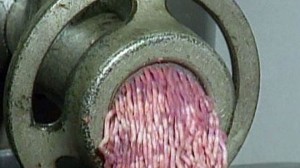 *We're not done yet!  Pink slime is still unlabeled and being sold in many grocery stores. Tell the USDA and FDA to get pink slime out of all ground beef now, or at very least to require labels to list it as an ingredient so that we can decide whether or not to buy it for our families. http://action.momsrising.org/sign/nopinkslime/

Even though supermarket chains like Kroger and Safeway will no longer sell pink slime, and schools now have some say in whether or not to purchase meat containing LFTB, more work is needed to make sure all families know what they are eating when they buy meat at the store or when their children eat lunch at school.

What is pink slime?

"Pink slime" is a term used to describe a food additive made from spare beef trimmings that are treated with ammonium hydroxide to kill off E. Coli, salmonella, and other possible bacteria. [4] Until we raised our voices, it was in grocery stores, cafeterias, and restaurants across the nation. In fact, merely one week ago, an article noted, "ABC cited a former U.S. Department of Agriculture scientist in saying that 70% of supermarket ground beef contained the additive." [5]

That is all about to change!

Our voices are being heard!  But we're not done yet.  Pink slime is still unlabeled and being sold in many grocery stores.

*Let's increase our momentum and tell the USDA and FDA to get pink slime out of ground beef now, or at the very least to require labels to list it as an ingredient so that we can decide whether or not to buy it for our families. Click here: http://action.momsrising.org/sign/nopinkslime/

Why are mom and dads so concerned about what our families eat?

Our children are facing increasing health risks related to their diets. As parents, we make every effort to feed them quality, wholesome foods but we can’t do that if we don’t even know what’s in the products we buy. It’s time to take pink slime off of the menu and off of grocery store shelves--or at least require it to be listed on food labels so moms and dads can decide what’s in the best interest of their families.

Please spread the word and share this blogpost with neighbors, family, and friends. When moms speak up, families benefit!