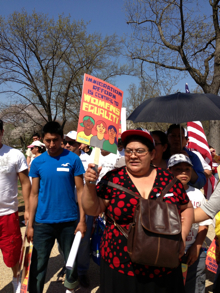 Photo on right: Many of us who participated in the rally waved signs that read, "Immigration Reform Is Central to Women's Equality." The amazing artwork on the signs is by Favianna Rodriguez.

Washington, D.C. -- MomsRising.org has long advocated for the needs and dignity of all women, children and families in our country, regardless of where they were born. We were proud to witness history on Wednesday when tens of thousands of Americans -- including those who aspire to become U.S. citizens -- gathered in front of the Capitol building to call on Congress and the President to reform our broken immigration system. 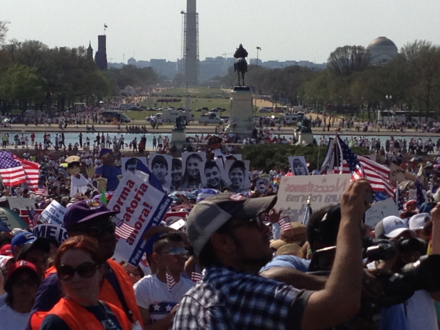 My cell phone about died at the end of the day as I snapped away at the beautiful mosaic that is the United States of America. People of all backgrounds came together, waving signs, singing to songs on stage and patiently standing in the heat as speaker after speaker passionately spoke in favor of comprehensive immigration reform. Here are snapshots of the estimated 40,000 people who participated in yesterday's rally: 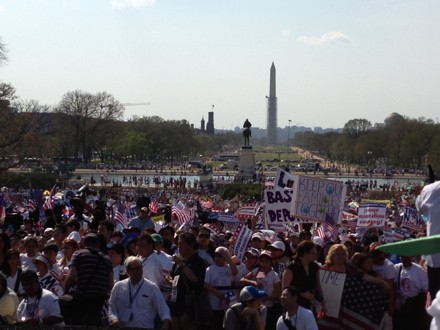 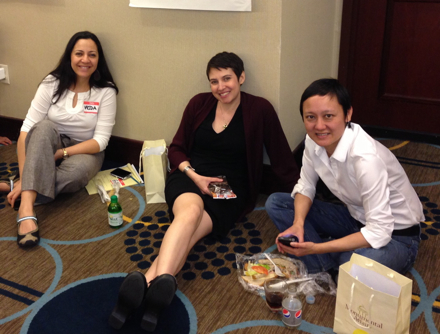 Photos: Getting ready for the rally... 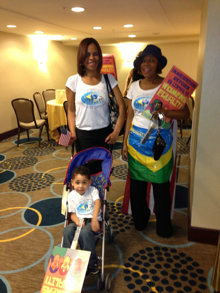 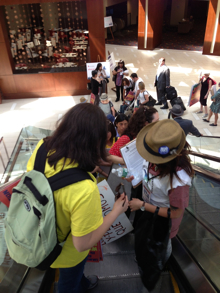 Photo: NAPAWF's Miriam Yeung and others walk over to the rally. Those of us who participated in the We Belong Together women's contingent wore fedora hats to represent the many hats that women wear in our lives. 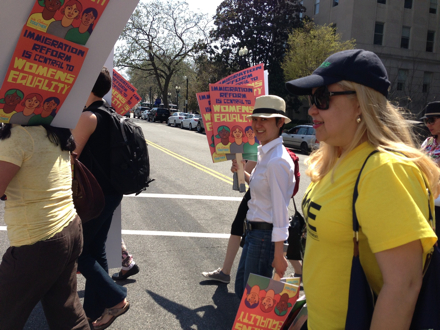 Photos from left to right: A member from the National Domestic Workers Alliance stands tall and proud; One of the "Gang of 8" Senators drafting the immigration reform bill, Senator Bob Menendez of New Jersey, not only addressed the rally at large, but interacted with participants on the ground. 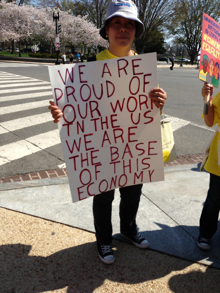 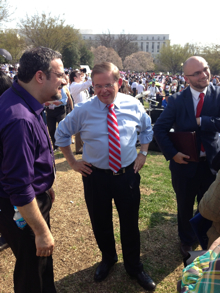 Photos from left to right: The t-shirts worn by a Jewish contingent at the rally; I and Andrea Cristina Mercado, a campaign director with the National Domestic Workers Alliance, with Telemundo news anchor Jose Diaz-Balart 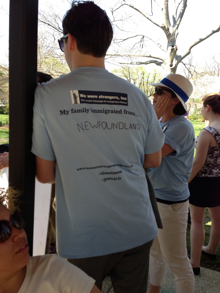 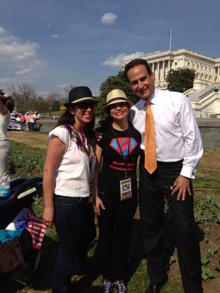 Photo: Just a lovely image as I, too, am devoted to Mother Mary. As a child growing up in Miami, I always credited her for protecting the Cuban and Haitian rafters who arrived safely to our shores. 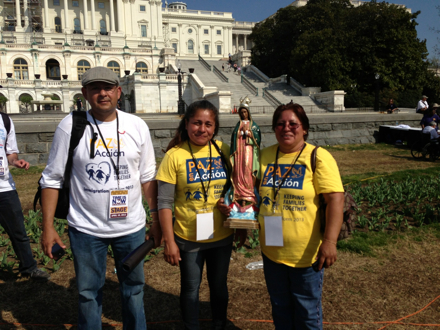 Photo: A group of us from We Belong Together and U.S. Rep. Ruben Hinojosa of Texas. 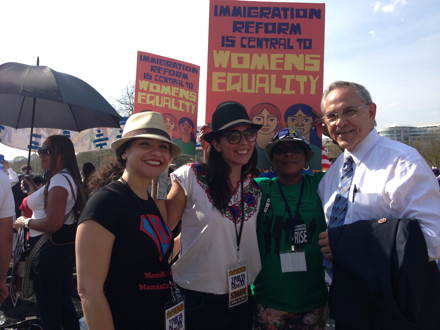 Photo: A Peruvian participant from Virginia immediately stood up to offer her umbrella to United Farmworkers Union luminary Dolores Huerta. 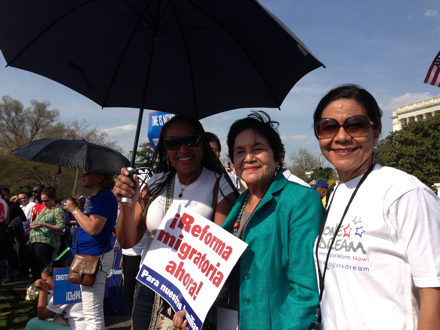 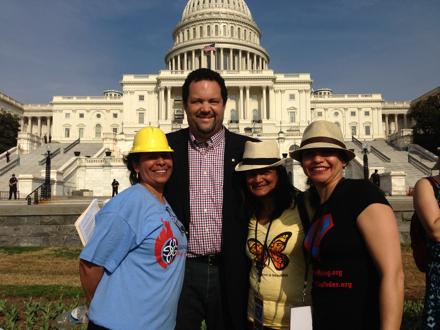 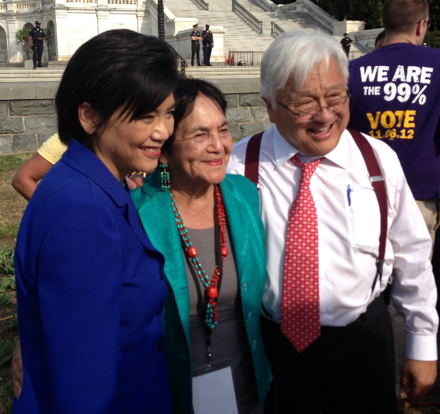 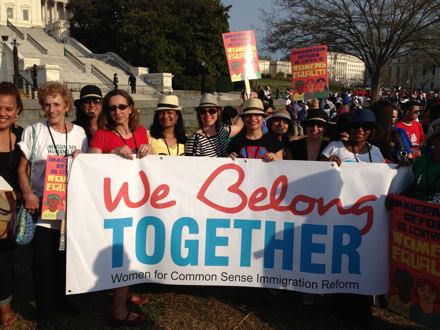 Photo: I about fell out of my imaginary chair when Olga Tañon took the stage to call on President Obama "to keep your promise" and pass comprehensive immigration reform. She is a world-class merengue singer from Puerto Rico. I work out to her music all the time! 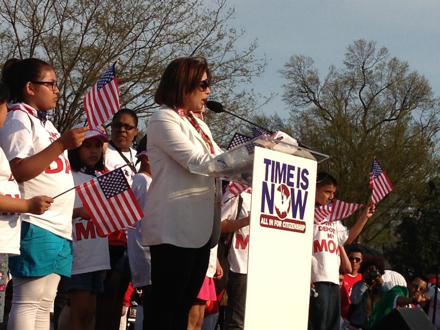 Photos from left to right: Gustavo Torres, Executive Director of CASA de Maryland, was a graceful MC despite the punishing schedule and heat; And that brilliant woman I caught waving from the crowd? Latinos in Social Media's (LATISM) Vice President of Communications Elianne Ramos! 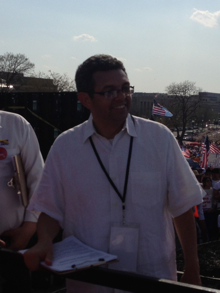 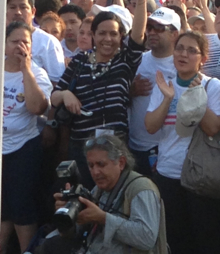 Photo: Rea Carey, the Executive Director of the National Gay and Lesbian Task Force, spoke on behalf of our women's contingent. She was brilliant and passionate, saying unequivocally that immigration is indeed an LGBT issue, that no one should be kept from the person that they love because of immigration status. Here she talks to We Belong Together Co-Chair Pramila Jayapal; Family Values @ Work Executive Director Ellen Bravo looks on. 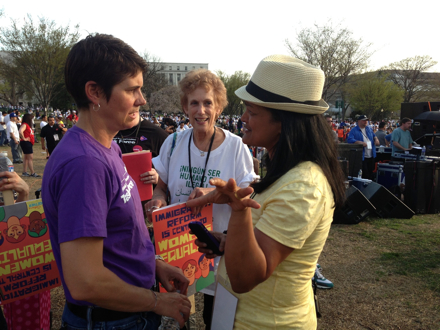