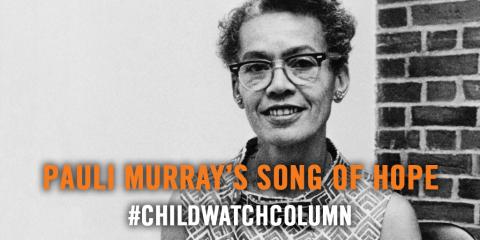 This verse is from the poem “Dark Testament” by the Rev. Dr. Anna Pauline “Pauli” Murray, a writer, scholar, Episcopal priest and civil rights warrior who spent her extraordinary life challenging barriers and systems of discrimination in all forms. I recently had the joy of being the first overnight guest at the new Pauli Murray College at Yale University after the dedication of the new residential college named in her honor. She would be so pleased!

Pauli Murray was a superb groundbreaking civil rights lawyer and the first African American to receive a J.S.D. degree from Yale Law School. She was a college vice president and professor in universities in the United States and Africa. Pauli was a sit-inner before the 1960s sit-in movement of my generation, a founding member of the National Organization of Women (NOW) and the Congress on Racial Equality (CORE), a member of the Equality Committee of the American Civil Liberties Union (ACLU), and a longtime close friend of Eleanor Roosevelt. Her protest against segregated transportation in Washington, D.C. preceded Mrs. Rosa Parks’ famous actions in Montgomery by many years. In her sixties she answered a call to the priesthood and enrolled in seminary and in 1977 she became the first African American woman to be ordained a priest in the Episcopal Church and was later designated an Episcopal saint.

I met and got to know Pauli Murray at Yale Law School in 1960 where she was a mentor and dear friend during my three years there. By the time she arrived at Yale she had already published her acclaimed memoir Proud Shoes and the landmark legal study States’ Laws on Race and Color which Thurgood Marshall called a Bible for civil rights lawyers. Her argument about the importance of focusing on the “separate” part of the “separate but equal” doctrine of the Plessy v. Ferguson Supreme Court decision was relied on heavily by the lawyers arguing Brown v. Board of Education, and it turned out to be that “separate” clause that helped put us over the top.

Orphaned at an early age, she earned her undergraduate degree with honors from Hunter College and graduate degrees in law from Howard University and the University of California at Berkeley – after being turned away from the University of North Carolina-Chapel Hill’s graduate school because of her race, and Harvard Law School because of her sex. Her unsuccessful struggle to be admitted to UNC, where her White great-great-grandfather had been a trustee, received national publicity and the support of the NAACP. At Yale, she and I and all women graduate students like my handful of fellow Black students including Congresswoman Eleanor Holmes Norton and now retired Judge Inez Smith Reid experienced exclusion from the male only Law School dormitories. We either had to stay in town or in the one women’s graduate dorm – Helen Hadley Hall – although I was blessed to be able to live with Yale Chaplain William Sloane Coffin and his family for a year. One law professor taught his constitutional law course at Mory’s, a club which excluded women. Women were not admitted to Yale College at all. But we had each other and a handful of other Black women students in other Yale Graduate School departments who forged a network of mutual support. Pauli had her own apartment with open doors for counsel and meals. Regular Sunday night Pauli dinners are a fond memory. Now, through the naming of a Yale college after her, generations of students will learn about her extraordinary legacy, see her as a peerless breaker of barriers and hopefully follow her example.

Many alumni cheered when Yale decided to name a new college after Pauli Murray along with a second new college honoring Benjamin Franklin. Just as he changed from being a slaveowner to an abolitionist, perhaps he points the way for us towards continuing transformation of colleges and universities and other places where proponents of slavery have been held up as heroes reflecting inappropriate unjust values in our 21st century and third millennium world. Yale’s actions reflect the long overdue need for universities and other institutions to more fully and truthfully come to grips with our collective national past. This year Yale renamed Calhoun College, first named in 1933 after staunch 19th-century South Carolina White supremacist politician John C. Calhoun, in honor of pioneering mathematician and computer scientist Rear Admiral Grace Murray Hopper. These are important down payments in moving our education systems and nation towards a real value system of equal opportunity and justice for all.

We must reflect the human values we want our children and grandchildren to learn in a world that is now two-thirds non-White and a nation where children of color will soon be the majority. Naming and other symbols are very important but they are not a substitute for creating a level playing field for every child born in our nation. We must make sure that those who continue to bear the burden of our national birth defects of Native American genocide, slavery, and the exclusion of non-propertied men of all colors and all women from the electoral process are able to experience a fair chance to succeed. The Yale committee that ultimately recommended renaming Calhoun College wrote: “A university ought not erase the historical record. But a great university will rightly decide what to commemorate and what to honor, subject always to the obligation not to efface the history that informs the world in which we live.”

We are at a national moment in deep need of truth and reconciliation and a confrontation with resurging White supremacy when some of our nation’s leaders appear to be deeply ignorant or confused about America’s history and what and who to commemorate and honor. Just a few months ago we heard President Trump equating the violent White supremacist mob in Charlottesville that killed Heather Heyer and the nonviolent protestors as equals rather than taking a stand against hatred and bigotry, saying both sides included “very fine people.” It’s past time to prepare all of our children at all levels to celebrate the diversity of our heroes and heroines. There will always be a need for discerning leadership able and willing to confront and understand the truth about our nation’s history and learn from it to build a more just future for all. All of our education systems and anchor institutions need to understand and help our children learn about and celebrate the gifts of all of our people and join in building a more just future for all.

Pauli Murray fully understood and confronted the truth of our nation’s shortcomings and spent her life trying to make us a better and fairer people. She knew that hope often comes from a weary throat but never stopped hoping and working and fighting courageously, strategically and persistently for a country and world where girls of all colors and sexual orientations and everyone else could be treated equally without discrimination or exclusion. At a national moment when it might sometimes seem all too easy to grow weary we must never, ever lose hope and keep pushing to replace unjust symbols, policies and practices of the past with new symbols, policies and practices that ensure access, equality and justice for all. We must build a nation where no child is left behind and every child has a healthy, head, fair, safe and moral start in life and successful transition to adulthood able to take advantage of every opportunity our great nation offers.