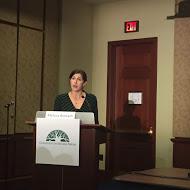 Author's note: Earlier this month,, we discussed the June 16 event hosted by the Coalition on Human Needs, What Works – And What Doesn’t – To Reduce Poverty and Expand Opportunity. As part of that event, Melissa Boteach, vice president of the Poverty to Prosperity Program at the Center for American Progress, delivered a presentation on House Speaker Paul Ryan’s anti-poverty plan. She discussed what it contains, what it lacks, and ways to fight and talk about poverty in the U.S.

We encourage you to watch a recording of the event and visit the event webpage where you can get more resources. We also hope you’ll continue the conversation either by commenting at the end of this blog or by using #talkpoverty and @CoalitiononHN on Twitter.

The title of Melissa Boteach’s June 16 presentation, “Better Lipstick, Same Pig: Strategies to respond to the House GOP poverty plan and pivot to a progressive agenda,” is a play on the fact that what House Speaker Paul Ryan and his colleagues in Congress unveiled wasn’t all that new. In fact parts of it weren’t new at all.

“We’ve seen for several years now, stepped-up rhetoric and acknowledgement on the part of conservatives on poverty, but every time we see policy recommendations come out, it tends to be more of the same: work requirements, block grants, things that would actually exacerbate poverty and inequality,” Melissa explained.

Melissa’s presentation fell into three areas: Myths that Ryan perpetuates about poverty. What his plan contains and what it lacks. And how to pivot to a smarter, evidence-based, more progressive approach to fighting poverty.

One of the first myths Ryan and his colleagues promulgate is that somehow, lower-income people don’t want to work, or aren’t working. Melissa points out how false that is. “People are working,” she says. “They are working in low-wage, dead-end jobs. They don’t have the supports they need to thrive. And when they are unemployed, they are actively searching for work.”

Another myth, she says, is that safety net programs somehow encourage people to remain in poverty. “One of the main myths that’s perpetuated in Speaker Ryan’s plan is that the War on Poverty failed and these programs are a poverty trap,” she said.

In reality, poverty is a more complicated mosaic of personal struggles and economic conditions in the U.S., notably, the lack of good-paying jobs. Leading causes of poverty include such factors as job loss or cutbacks, birth of a child, or onset of an illness or disability. Roughly one in three Americans struggle to make ends meet. And were it not for the dramatic rise in economic insecurity since 2000 – a period of time that includes the 2008 Great Recession and beyond – 13 million fewer Americans would be living on the brink of economic catastrophe today.

And, Melissa argues, Ryan mischaracterizes the safety net. She notes that without vital programs such as Social Security, nutrition assistance and tax credits for working families, the country’s poverty rate would be nearly twice as high as it is today. Indeed, 70 percent of all Americans will need to turn to the safety net at some point.

Critics have noted that the Ryan plan is largely lacking in specifics. Its highlights include requiring safety net program participants to work; giving states more flexibility and streamlining anti-poverty programs; and changing polities that “trap” people in poverty while “getting the incentives right” to move people away from participating in safety net programs. And strangely enough, it rolls back consumer protections, such as the Obama Administration’s recent efforts to protect borrowers from predatory payday lenders who charge usurious rates.

And what’s not in the plan?

“For someone who speaks a lot about work requirements, where are the jobs?” Melissa asks. “Where’s the job creation? Where are the efforts to boost wages? Where are the work supports that enable people to get and keep a job? These things are not in the plan.”

Another thing that’s not in the plan: Any mention of funding levels, or of the budget the House passed last March. Fully three-fifths of the cuts included in that budget come from programs that help low- and middle-income Americans. “It is incumbent upon us those two things are not divorced and that they are tied together in a way that shows what this plan is all about,” Melissa said – meaning advocates of a progressive plan to fight poverty need to constantly point out that not only does the Ryan plan constitute flawed public policy, but the accompanying House budget would slash human needs programs to shreds.

“Ryan’s proposals are spelled C-U-T,” Melissa explains. “Their plan amounts to little more than slashing effective investments that help families get the child care, nutrition and education they need.”

When considering the Ryan anti-poverty plan, it is very important in the context of the GOP budget. For example, the budget cuts housing aid, despite the critical housing crisis. It cuts SNAP by billions of dollars over the next decade. And another bill, reauthorizing child nutrition programs, It cuts school lunches for children of low-income families, and rolls back efforts to feed these same kids when school is out during the hot summer months.

What is the progressive approach to fighting poverty?

The Center for American Progress has released A Progressive Agenda to Cut Poverty and Expand Opportunity. And any discussion of Ryan’s poverty plan should include a discussion of alternatives such as CAP’s, Melissa explains.

“We have failed if this becomes a referendum on a bad set of proposals,” Melissa says. “What we need to have this be is a conversation, a national discussion, and a debate about how do we best cut poverty. And to do that we have to be out there with what the solutions are. Job creation, infrastructure, education, research, raising the minimum wage. Ensuring basic labor standards such as paid sick days, fair schedules. Ensuring basic living standards. So rather than just saying ‘Don’t cut vital programs,’ how do we strengthen? How do we expand EITC for childless adults? How do we invest in children and early childhood education?”

Answers to those questions can be difficult and elusive. But they are essential if human needs advocates are to meet, and defeat, the challenges and dangers that the Ryan anti-poverty plan presents.