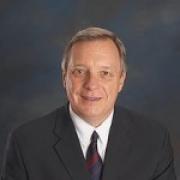 Dick Durbin
Share This
Add your voice to the comments

Eleven years ago, I was contacted by Ann Monaco, a teacher at the Merit School of Music in Chicago. One of her students – Tereza Lee – was a musical prodigy who had played as a soloist with the Chicago Symphony Orchestra. After growing up in an apartment with no heat or hot water, and learning to play the piano at her father’s church, Tereza had been accepted into several of the country’s most prestigious music schools.

But Tereza had a problem. Her parents had brought her to the United States when she was two, and she was undocumented. We contacted the INS and they told us there was no way for Tereza to obtain legal status. What an extraordinary waste of talent.

That's what led me to introduce the DREAM Act, legislation that would give a select group of immigrant students the chance to earn their citizenship.

A lot has changed since then. More than a decade later, these young people are not whispering any more. They call themselves Dreamers. And they are organizing, marching, speaking out, and telling their stories to the American people.

Their stories are the story of America.

Gaby Pacheco was brought to the United States from Ecuador when she was just seven-years-old. She was the highest ranked Junior R.O.T.C. student in her high school. She has earned two associates degrees in education and is currently working on her BA in special education, which she hopes to use to teach autistic children.

Oscar Vazquez was brought to Phoenix, Arizona when he was a child, and spent his high school years in Junior R.O.T.C. After graduating from Arizona State University with an engineering major, Oscar took a brave step and voluntarily returned to Mexico, a country he hadn’t lived in since he was a child. Last year, the Obama Administration granted Oscar a waiver to re-enter the United States. When he returned, he did two things: he applied for citizenship and he enlisted in the Army, eventually deploying to Afghanistan.

Herta Llusho was brought to Grosse Pointe, Michigan from Albania when she was 11. After graduating from high school with a 4.05 GPA, Herta attended the University of Detroit Mercy as an honors student studying to be an electrical engineer, a STEM field.

As more and more Dreamers step forward, it is clear that their stories are the best way to explain the need for the DREAM Act.

These young Americans have put immigration back on the national agenda. Their tireless organizing and advocacy paid off when President Obama announced Deferred Action for Childhood Arrivals earlier this year. This was a historic moment in the long struggle for equal justice in America. Finally, many Dreamers will be allowed to live and work legally without the fear of deportation.

But this story is not over yet. This is a hopeful time for Dreamers, but there is more work to do. We need to pass the Dream Act and give these bright ambitious young people a path to citizenship in America. And we need comprehensive immigration reform legislation that will bring Dreamers and their families out of the shadows and give them a chance to contribute more fully to our country.

By the way, Tereza – that first Dreamer – went on to obtain her bachelors and masters degrees from the Manhattan School of Music, where she is now pursuing her Doctorate. In 2009, Tereza played her debut at Carnegie Hall.

From a church basement to the stage of Carnegie Hall -- now that's an American story with the right kind of ending.