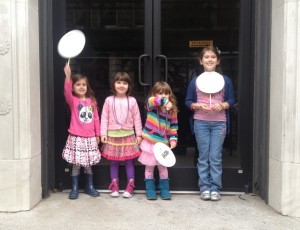 Holding signs that say "We want to be toxic free" outside Sen. Burr's Wilmington office.

On January 3rd, I met with MomsRising members in Wilmington, NC for a “Parent Warrior Brigade” for toxic chemicals reform. We were joined by Jerry Ensminger, fellow “Parent Warrior” and former Marine drill sergeant, whose daughter died from leukemia after exposure to toxic chemicals in the water at Camp Lejeune. He shared some words of inspiration for us:

“Having personally experienced the horrific effects of toxic exposure by watching my nine year old daughter pass away from leukemia (which could only be explained by her exposure to contaminated tap water at Camp Lejeune, N. C.), I know the importance of the issues you are fighting for. It took me 15 years of fighting for the victims of Camp Lejeune until I finally achieved some semblance of justice. The bill which President Obama signed into law on August 6, 2012 was by no means the total resolution for the Camp Lejeune issue but it was a good beginning and my fight goes on. If anyone is to take anything away from my experience it should be that if your fight is valid and you know that you are right, then don't ever give up until you have achieved your established goal(s).

I can assure all of you that during the last 15 years there have been times that I absolutely wanted to beat my head against the wall and throw in the towel. I experienced resistance from the Department of the Navy, the United States Marine Corps and from several other federal government entities and/or their representatives, I even met resistance from some federal lawmakers on Capitol Hill but I never quit...nor do I intend to!”

Some other dedicated MomsRising members brought their children ages 3 - 8 along, as well as a representative from both Toxic Free NC and the NC Conservation Network. We met at the main library in downtown Wilmington to make our signs and prepare for our meeting with Senator Burr’s staff. The signs the kids made read, “Keep me toxic free!” 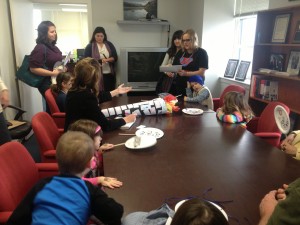 After we marched the few blocks to Senator Burr’s office we met with one of his staff members and delivered over a thousand messages, signatures, and post cards asking the senator to support toxic chemicals reform. The primary message we brought to the Senator’s office was a “thank you” for supporting the families of Camp Lejeune and a plea for him to continue to be a “warrior” for the families of North Carolina.

Our members shared their concerns about not being able to shop their way out of this problem because the information is simply not available. One of our members explained that when she put new flooring in her house her children developed some serious medical issues. They later found out that the illnesses were caused by the toxic chemicals that were off gassing from the new flooring. Another member, who is a small business owner, shared her story about struggling to find non-toxic products and furnishings to put in a play space she is building for her business.

Our messages seemed to be well received and we look forward to working with Senator Burr and his staff toward better toxic chemical regulations in the future.

News 14 Carolina did a great story about the event.

Why do we need toxic chemicals reform?

Toxic chemicals are putting our families at risk. Current chemicals legislation, the Toxic Substances Control Act (TSCA), has not been updated since 1976. We have learned a lot since then about the effects of chemicals and how they can migrate from the materials in the products we use (like furniture, kids toys, and canned foods) into our bodies. These chemicals put our families at risk for cancer, learning disabilities, infertility and more. [1],[2]

In 2010, the President's Cancer Panel showed a link between exposures to toxic chemicals and rising cancer rates.[3] Six months later, new research from the Journal of Pediatrics showed that a recent rise in early puberty for girls is linked to exposure to endocrine disruptors, which are rampant in everyday items, such as household cleaners and cosmetics.[4]

The Federal Centers for Disease Control have found that the blood or tissues of almost every American carry hundreds of these chemicals, some present even before birth.[5] Yet under the outdated TSCA, the EPA has only been able to require testing of a few hundred of the 62,000 chemicals that have been on the market since the TSCA was passed 35 years ago, a number that has increased to 85,000 chemicals today.[6]

If you want to encourage your legislator to support toxic chemicals legislation, let them know by sending a message or calling. You can find their contact information here.