Our Values: The U.S. House of Representatives Should Take Up Immigration Reform 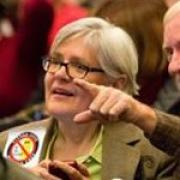 Elaine Cooper
Share This
Add your voice to the comments

We must gain back our national values.

Last year a local restaurant in Columbia, South Carolina engaged in anti-immigrant activity by selling derogatory t-shirts attacking Latino immigrants. Their ill-minded actions represent a wave of prejudice we see in our country.

But their prejudice was faced by courage and love as dozens of mothers and children peacefully protested outside the restaurant for weeks. Many neighbors and friends cooked meals for these families and offered their support. This is the country I raised my adopted Korean son in.

Now it’s time to confront prejudice with love and courage in the U.S. House of Representatives. Their lack of action to move on comprehensive immigration reform feeds an anti-immigrant fervor led by a very small group of people and keeps millions of mixed immigrant status families in limbo. We need leadership by our House Representatives to update our immigration policies in order to bring families together and strengthen our communities.

There is no reason for us not to pass comprehensive immigration reform. The bill was passed with bi-partisan support in the U.S. Senate in June 2013. We need our Congressional representatives to follow the steps of Senator Lindsay Graham who helped craft the immigration reform bill in the Senate.

Passing comprehensive immigration reform is the right and thoughtful thing to do both morally and also financially. Providing a pathway to citizenship would allow aspiring Americans to fully participate in the formal workforce, paying all taxes for services that benefit Americans, not to mention their labor. It would help keep families intact and protect U.S.-born children who may have one or two immigrant parents.

Every day that immigration reform is not passed, 5.5 million U.S.-born children living in immigrant households run the risk of being separated from their parents, a nightmare for any small child. These are not the values and principles our country was founded on.

Strong family values, a good work ethic, and unified communities – these are our values as a country -- not those espoused by those with agendas filled by prejudice. As a constituent in South Carolina, I strongly urge the U.S. House of Representatives to take up comprehensive immigration reform to strengthen our country and meet our core values.