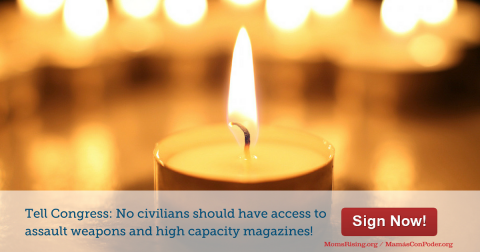 Our Hearts Break for Victims of the Massacres: Lawmakers Can & Must Act NOW

"The brutal mass shootings in Dayton last night and in El Paso yesterday morning were two more heart shattering, preventable tragedies. Too many lives have been ended or forever altered. Too many mothers, fathers, sons, and daughters are mourning.  There have been more mass shootings in our country than there have been days in 2019;  many shooters have used military-style assault weapons, which must be banned; and in recent years white nationalist extremists have killed more people in the United States than any other type of domestic extremist. We mourn the victims in Dayton and El Paso and stand with all those affected by the senseless gun deaths that are devastating our communities virtually every day. We will not rest until the epidemic of gun violence and hate in America ends.

“As we mourn those lost, we must address the deeply disturbing fact that these and other shooters may have been motivated by abhorrent white supremacy, white nationalism, bigotry, and anti-immigrant hate. From the Muslim Ban and ‘Send her back,’ to ‘Build the wall’ and family separation, President Trump’s dehumanizing racism emboldens those who commit hate crimes, including those who use military-style assault weapons with high-capacity magazines to terrorize and kill.

“Make no mistake, the President’s hate-filled words and actions are provoking violence and weakening our country in profound ways. White nationalism is domestic terrorism. It’s time for the media to call it out as such.

“The diversity of our nation is what makes us strong, innovative and prosperous, not the opposite.  America’s moms join with responsible leaders in government, the religious community, and law enforcement in denouncing the President and his allies for their inflammatory, divisive, and dehumanizing rhetoric and policies. It is not enough for them to condemn individual acts of violence. The hatred, the division, and the easy access to high-powered guns must end.”

“The atrocities that occurred in Dayton and El Paso this weekend are part of an escalating pattern of attacks by domestic terrorists, many of whom are inspired by racism and hate. The dangerous rise in hate speech, hate crimes, and white supremacy in our country over the last few years, combined with easy access to powerful firearms, facilitate tragedies like these.

“America’s moms are horrified. Military-style assault rifles like the AR-15 and AK-47 are the weapons of choice for mass shooters and have been used over and over by domestic terrorists. Tens of thousands of moms and family members have signed on to MomsRising’s demands that Congress protect our families and communities by, among other things, banning the sale of military-style assault weapons and high-capacity ammunition, and disarming hate by preventing individuals convicted of violent misdemeanor hate crimes from purchasing or possessing firearms.

“Enough is enough. We need our elected leaders to de-escalate the hate and reaffirm their commitment to our democratic values of freedom and justice for all.  And we need them to enact solutions NOW to stop our epidemic of gun violence.”

Reporters: This statement is also available in our newsroom.

You can tell Congress to act to prevent more massacres NOW by clicking here: https://action.momsrising.org/sign/stem_the_tide/.