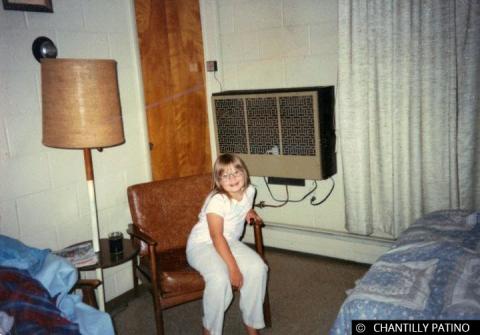 Me in our hotel room after we were forced out of our home. 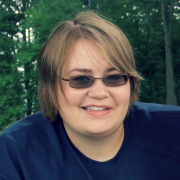 Chantilly Patiño
Share This
Add your voice to the comments

I grew up on Food Stamps.  As a child, that's all I knew.  Well, that, and the long lines we waited in for cheese, butter and powdered milk at the end of the month when food ran out.  Or the glare looks from men and women in the grocery lines as my mother reached for her book of Food Stamps.  As I got older, I learned to be embarrassed about our situation.  I dreaded those eyes...all the people watching, and the comments my mom got for being a mother to four children and poor.  I've talked before about how these types of situations created self-doubt in me.

I remember the nights when we went to bed hungry.  I remember going to school and having to wait in a separate lunch line than the rest of the kids.  Watching other kids eating those fancy snacks I saw on the commercials, but had never tasted myself...things like Twinkies or Lays potato chips.  I never had those growing up.  We didn't have money for snacks because we barely had money for food.

I don't know how to describe this to someone who's never lived on Food Stamps, what's now called SNAP.  People don't understand what it's like to grow up with a "survival" mentality.  They don't know how poor families form community around food and why obesity is such a problem for the poor.  They probably think it's because we have too much, but in fact, it's because we have too little.  We probably emphasize food in our families to a level that some might call "unhealthy".  But then, they don't know what it's like to go without for so long.  I'm betting that they've never thought about the 5th-grade kid who gets their first taste of a hot pizza from Pizza Hut thanks to the "Book It" Program.  Or the kid who runs the supermarket aisles for free samples to fill their empty belly.  I was that kid.

That photo above is me in a hotel room, right before my parents got divorced.  It was one of my fondest memories growing up.  I remember having air conditioning (for the first time) and getting popsicles (a rare treat) every day that week while I was sick.  I loved having my mom and dad in the same room with me and having my mom take care of me.

Later on, I asked my mom why we were in that hotel and how we could afford it.  I found out that we had to use our rent money to stay in the hotel and a month's rent did not cover the cost.  I didn't realize why we left at that time, but I remember crying and asking mom if we could stay there.  It was the nicest place I'd ever lived.

As I asked my mom in later years, she told me about how our landlord had sold our house out from under us, which we were paying for on a "Land Contract"...a common practice in low-income communities.  She had signed an agreement, it was all official, but ultimately, when the landlord decided to sell the house to someone else instead, and we didn't have the financial means to take him to court in order to keep our home.

These types of situations are why families like mine continue to rent.  Many of us never buy homes.  My mother still doesn't own her own home...and neither do I.  We're terrified at the thought of losing it all.

All this just to say, people who have wealth, and even those who are middle class, do not understand what it's like to live in poverty...unless they've been there.

That's the point that Congresswoman Jackie Speier makes in the video below, as she pleads with our elected officials to prevent cuts to the SNAP program.  I applaud her.

One of the things I knew growing up is that the wealthy receive more benefits than anyone in this country - both socially and financially.  And it's not that way by accident.  The wealthy find plenty of opportunities to lobby for themselves, for laws that benefit them, for bigger tax breaks and more community enrichment programs on the government's dime.

But who will lobby for the poor?  Who will look out for the kids growing up poor in America?  I worry about that a lot...especially in a nation that is increasingly polarized and where businessmen and congressmen don't find value in those who don't "contribute their share".  Is money really the only thing that matters?  What about humanity?

I'm glad there is someone out there defending humanity and that people like Congresswoman Jackie Speier are speaking out about the hypocrisy of government spending.  But it's not nearly enough.  We need more action.

Learn more about how you can take the SNAP Challenge.