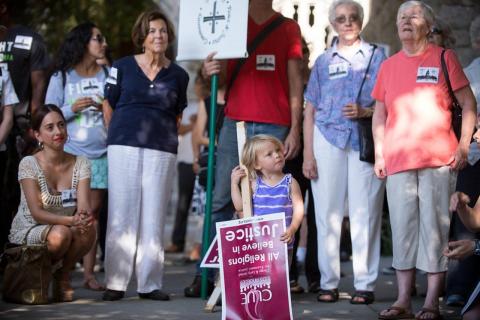 On Democracy and Paid Family and Medical Leave

“Mommy, you do…de-de-democracy.” That was my daughter’s recent assessment of my career. As a three-year old-her grasp of the term ‘democracy’ may be slightly tenuous, but her comment left me both amused and reflective. Does our work trying to improve the quality of jobs in the U.S. count as democracy?

On the third anniversary of the introduction of the Family and Medical Insurance Leave (FAMILY) Act, I’m going to do what any beaten-down parent of a strong-willed three year old would: acknowledge that she’s right. Indeed, a bill like the FAMILY Act—which would help tear down barriers to gender and racial equity, economic security, and equal opportunity—is inextricably linked to democratic ideals. That’s why, now more than ever, we must continue the fight for a paid family and medical leave law that is smart, generous, and universally accessible.

The FAMILY Act would create an insurance pool, funded by small contributions from employers and employees, which workers could draw on when they need to take up to 12 weeks away from work to care for a sick family member, bond with a new child, or recover from their own serious illness.

Paid family leave is sometimes depicted as a benefit, a perk, something extra—hardly a building block of democracies. But those who think of paid leave this way should take a second look. According to leading economists, women’s declining labor force participation may be due to lack of paid leave. Without paid leave, many caregivers must exit the workforce, leaving behind hundreds of thousands of dollars in wages, Social Security, and pensions. People of color and low-wage workers, who disproportionately lack access to paid leave, are particularly at risk.

Families who suffer lost earnings or can’t participate in the labor force struggle to be economically secure. In addition to being a hardship, this limits their ability to participate in our democracy. When large segments of our population are thrown into financial crisis for taking on caregiving and reproductive work or trying to recover from illness, theirs are voices less likely to be heard.

In the recent election, both major candidates discussed the importance of some form of paid family leave. This bipartisan interest was an unprecedented step forward. But if we want paid family and medical leave to be a tool for democracy—enfranchising those who are disproportionately affected by a flawed safety net—we need a paid leave law that upholds key principles. We need a policy that applies to all workers; offers at least 12 weeks of leave; covers both maternity leave andfamily and medical leave, with each broadly defined; is sustainable for businesses, government, and employees; and shields workers from retaliation when they take leave. The FAMILY Act embodies these principles.

The FAMILY Act holds a special place in my heart. That’s not only because it’s a progressive, thoughtful proposal that would address an enduring failure of American social policy—which it is—but also because it was born shortly after my own maternity leave ended. The bill and my daughter are both three now—and each has something important to say about democracy. At a time when many working families, particularly those in communities of color and immigrant communities, feel threatened and silenced, we should recognize paid family and medical leave as the essential worker protection that is. Supporting families and workers is a central pillar of our democracy—one we can greatly strengthen by passing the FAMILY Act.

Cross posted with permission from CLASP.