Nursing Sagas of a Working Mama 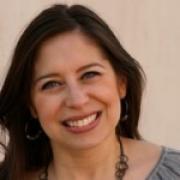 A few weeks ago, I found myself in the back of a rental car on the Rio Grande Valley in Texas, heading towards a gap in the border fence near a sanctuary that a local organizer insisted we MUST see. My colleagues and I were on a field visit to do campaign planning and technical support on reproductive justice, organizing with our local activists that are part of the National Latina Institute for Reproductive Health (NLIRH).

As we approached the visually painful 18-foot steel fence in the Sabal Palm Sanctuary section of the border, I pulled up a jacket over my chest as the border patrol agent was peeking into our vehicle. I was pumping in the backseat, with my battery-powered Medela pump making that familiar 'whish-whish' sound. My nerves calmed once the border patrol agent let us pass without questioning what the heck I was doing attached to that machine.

As a new mom to a 9-month-old and a new Executive Director for a national reproductive justice organization, I find myself in precarious situations when on work travel. Do I bring my son? Can I find childcare? If not, who will care for my child while I am away? Where will I pump? Where do I store the milk? The quandary leaves me scrambling for resources that range from the kindness of friends, strangers and colleagues, to extra cash to cover overtime childcare costs.

Both my partner and I have careers that require a high percentage of travel, leading to a decision to either pump or breastfeed on the road. Since I started my new role in mid-October, fresh off the return from parental leave, I have traveled 21 times to seven cities ranging from Washington, DC to Oakland, California. My son has joined me on a dozen of those trips; some have been quite exciting (White House Holiday Party where, at 4 months old, he was held by the President and First Lady) and others a unique experience (staying at a Chinese-only speaking day care in the Bay Area with a friend's son for two days).

At one meeting that provided on-site childcare, my child rotated to almost every lap of each of my colleagues, often chiming in the dialogue with a gurgle or a defiant 'bah bah bah'. I've nursed on trains, planes and automobiles....one time, performing acrobatic-like maneuvers to wiggle out of a back zippered dress on a shuttle flight in order to position my son to my breast, all while attempting to be "discrete". I felt the stares of men in suits on that typically infant-free business flight from New York to Washington, DC. Despite the endless stories and struggles of traveling with my infant, I have felt very empowered that, as a new mom, I could 'juggle it all'--a career I love and am passionate about, a positive and fulfilling personal life, and attempt at being the best parent I could to my precious little baby. But this is not without the anxiety and difficult decision-making that put me at odds with my independent style; I've had to plead for help and support in ways I have never done before.

In all the recent debate about attachment parenting, feminism and 'extended' nursing, including a New York Times 'Room for Debate' feature and a provocative Time magazine cover article, no one talks about the flip side of being a nursing working mama....pumping. During the daily grind, I have to figure out ways to squeeze in three pump sessions a day (or more if traveling without my son), often excusing myself from meetings to seek a private refuge and attach myself to that darn pump. In addition to pumping in the back seat of a car at the Texas-Mexico border, I've pumped at countless random locations, including the U.S. Capitol, bathrooms at bars, funder's offices, empty conference rooms, cramped Amtrak and airplane restrooms, closets, hotel rooms, and the ladies room at a sports arena during a Miami Heat basketball game.

With a horrific gasp, I've spilled milk on my office carpet, a hotel bed and a conference room table. While on the pump, I've practiced speeches, joined conference calls, responded to emails or looked at photos of my baby (I am told it is supposed to help the 'let down'....it doesn't for me). And speaking of 'let down', how about the race to work with your heavy breastpump bag in tow (and its serpent-like tubing parts), getting the pumps in throughout the day, and the rush home to see your baby and find out what you pumped is just not enough for the next day. My partner would be the bearer of good or bad news, as he applied his biomedical engineering degree to measure the liquid gold to the milligram. Yes, pumping is the very un-glamorous side of the decision to breastfeed.

But it comes with the territory and along with the decision to breastfeed (or not), it should be supported. In all the debate about breastfeeding, I feel that it is a personal choice that may or may not work for all mothers; however, it is critical that as a society, we have the policies and infrastructure in place to support those decisions. We should not be relegated to a bathroom or closet because society has not deemed it critical to create private nursing or pumping spaces in public locations. We should not have to feel the burning judgmental stares because we decide to breastfeed on a plane, or anywhere in public. We should not have to hear the banter of folks who are uncomfortable with the idea of mothers continuing to nurse when children are 'too old'.

We should not have to hear the denigration of mothers who are unable or uninterested in nursing at all. On this mama's day, we- as a society- need to respect and support the decisions that women and families make when raising their children. We also need to serve as advocates for change at the political and societal level so that the U.S. is no longer one of the lowest-scoring industrialized countries to be a mom, with a dismal breastfeeding policy score of 'poor' and the only developed country to not guarantee paid parental leave. Until then, I will continue to keep track of my random nursing and pumping adventures, hoping for one day to turn this randomness into acceptance.