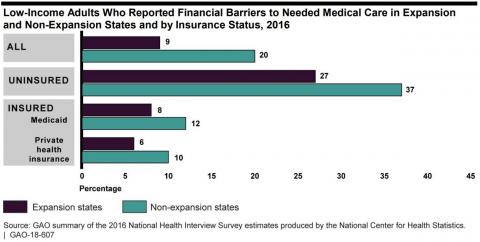 We know that states that expanded their Medicaid program have far fewer uninsured working-age adults. Now, thanks to a new study from the nonpartisan Government Accountability Office (GAO), we know that such health insurance coverage is leading to better access to care.

The GAO worked with the National Center for Health Statistics to analyze federal survey data from 2016. Among the report’s findings:

The GAO report doesn’t say why it is that uninsured low-income adults have fewer unmet needs or financial barriers to care compared to folks in expansion states, despite not having insurance. One could speculate that states that chose to protect more low-income residents by expanding Medicaid eligibility are also more likely to provide more funding for community health centers or other sites for care, and/or that they are better at providing other services like food and shelter that allow people in need to spend their limited resources on needed medical care.

Sen. Ron Wyden (D-OR), who requested the study, said following the report’s release, “States around the country have an opportunity to expand Medicaid to more people – these findings help show why it’s a winning proposition for states and the millions of Americans currently left out of America’s health care system.”

These findings are similar to the positive results compiled by the Center on Budget and Policy Priorities, which found, for example, that while 32 percent of uninsured people reported having a medical problem but did not see a doctor, that was true of only 9 percent of Medicaid enrollees. Medicaid enrollees were also less likely to report medical debt or trouble paying medical bills. In addition, surveys in Medicaid expansion states Arkansas and Kentucky found increases in enrollees getting health check-ups (30 percent and 54 percent up, respectively). Arkansas’ recent denials of Medicaid to nearly 8,500 people who could not meet work reporting requirements would be expected to reduce the number of people overall receiving check-ups.