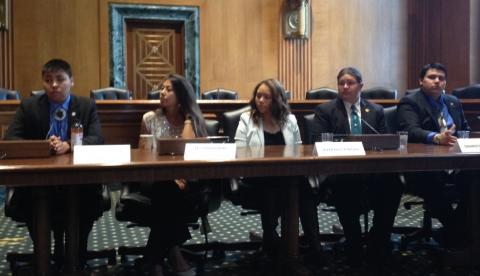 Native American Youth Advocating for Their Own

The odds were stacked against Shilo Valle. Born into poverty with parents who struggled with drug and alcohol addictions, Shilo was placed in foster care. He changed foster care placements 9 times, including stays at treatment centers, group homes, and juvenile detention facilities because they were the only beds available for him.  At 17 and still in high school, he was “foster homeless,” living in a tent when he was kicked out of a placement. When he exited the foster care system at age 18, he had no support system, no permanent connections. While high school graduation rates for American Indian/Alaska Native (AI/AN) youth are only around 50% nationwide, and only 13% of Native Americans have undergraduate degrees, Shilo became the first person in his family to graduate from high school and then college. He now advocates for improvements to the foster care system in Alaska.

I met Shilo and several other amazing Native American youth at a briefing in April held by Casey Family Programs and the Center for Native American Youth at the Aspen Institute. The briefing followed a White House Convening on Creating Opportunity for Native Youth, an event that brought together nonprofits, federal agencies, tribal leaders, Cabinet officials, Native youth, and First Lady Michelle Obama to talk about improving the lives of young Native Americans. One of the main focuses of the event was the Obama Administration’s Generation Indigenous initiative, which works to remove the barriers that stand between Native youth and their opportunity to succeed.

And there are many barriers. More than 1 in 3 Native American children under 18 lives in poverty. The National Indian Child Welfare Association reports that AI/AN children are more than twice as likely to be in foster care than the general population. AI/AN youth are arrested at a rate three times the national average, and 79 percent of youth in the Federal Bureau of Prison’s custody are AI/AN. Thirteen percent of homes in Indian Country lack safe drinking water and proper waste removal systems. In fact, a host of measures that indicate well-being show poorer conditions for AI/AN youth compared with the national average (see the infographics at the end of this post for some specifics).

At the front of the room with Shilo was Dahkota Kicking Bear Brown. He said that while he has a good family and good home life, he saw his friends struggling. When he was in the 8th grade, he started Native Education Raising Dedicated Students (NERDS), a trademarked nonprofit offering peer-to-peer tutoring for fellow Native youth. The program now has 9 chapters helping more than 250 students graduate from high school and go on to become strong leaders. There was Jazmyn Espinoza, who reminded us that while she doesn’t have control over the statistics that pertain to Native youth, she does have control over lots of other things. A 12-time suicide attempt survivor and also a sexual assault survivor, and now a high school senior, she created the Warriors Circle Project so Native youth can talk about challenges, suicide prevention, health and wellness, and other issues, and work together to offer advice and guidance to each other.

There was Teressa “Tessa” Baldwin, who at the age of 14 created Hope4Alaska, a nonprofit dedicated to raising awareness and increasing suicide prevention across the state. She’s traveled to over 40 high schools to talk to kids about suicide – the 2nd leading cause of death for AI/AN youth age 15-24, with rates 2.5 times the national rate – provide resources, and help kids. And there was Rory Wheeler, a 17-year-old White House Tribal Ambassador and volunteer firefighter who attends leadership development conferences around the country and inspires peers to create positive change in their communities. Rory also is an advocate against derogatory mascots and recently assisted in a campaign to retire the R*dskins mascot in Lancaster, NY.

These amazing youth advocates may advocate for different specific priorities, from changes to adoption laws in Alaska, to more funding for Indian Health Services, and specifically mental health services, to more afterschool and summer activities to keep Native youth off the streets. But together, they’re all doing incredible work in their community and advocating for a brighter future for Native youth.

The event they spoke at was set up to brief staffers of Members of Congress. I hope every Hill staffer and elected official takes the opportunity to see the courage of these young leaders, listens to what they have to say, and acts upon the things the federal government should be doing do to help.

“If there is one thing that Congress could do to really improve our Native communities, that would be actually visiting them. I encourage all of our congressional members to visit the Native communities near them and see that there actual people behind the statistics. If they want to make a change, they need to see firsthand the problems affecting our lives in Indian Country.”

This post was originally published on the Coalition on Human Needs' blog, Voices for Human Needs. Subscribe today to recieve similar articles in your inbox. Pledge to Fast for Workers and the HEROES Act