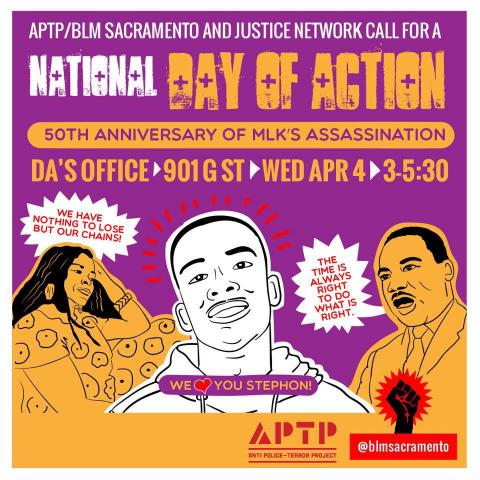 Thank you to BLM Sacramento for the above image!

NATIONAL DAY of ACTION for #StephonClark in Sacramento!

It’s been two weeks since Stephon Clark, a father of two, was killed by Sacramento police officers. Unarmed, in his grandmother’s backyard, Stephon was shot twenty times most of which were from the back. Yet again, another senseless killing of a man at the hands of those sworn to protect them. His crime? Being black. In his own backyard. With his family inside.

RSVP to join us this Wednesday in Sacramento to demand justice for Stephon Clark!

Here in Sacramento-- as well as across the nation- we are all still seeking answers, justice, and accountability for Stephon. That’s why this Wednesday, on the 50th anniversary of Martin Luther King Jr’s assassination, MomsRising will join hundreds of others in Sacramento, and thousands from across the country for a Day of Action, and will deliver nearly 20,000 signatures to the Sacramento District Attorney’s office, demanding answers and accountability.

Here are all the details for you:

What: 2.5 weeks after Stephon Clark’s senseless murder and on the 50th anniversary of Martin Luther King Jr’s assassination, MomsRising will be joining a National Day of Action to demand justice for Stephon Clark.

** We will be joining Black Lives Matter Sacramento, The Anti-Police Terror Network and The Justice Project, along with many others, for this powerful day of action!

Who: You, your family, friends, neighbors, MomsRising staff, and community leaders from across the state.

We will deliver over 22,000 signatures from MomsRising members to Sacramento District Attorney Anne Marie Schubert. District Attorney Schubert’s problematic history of letting police walk away from unjustified violence without consequence [1],[2], along with the long and harrowing history of racism within law enforcement, has left families like Stephon Clark’s with nothing but trauma and pain, and the memory of lost loved ones that they’ll never get back.

We want District Attorney Schubert to provide total transparency of the investigation from beginning to end, because that is what Stephon Clark’s family deserves.

The police brutality epidemic in the United States is at an all-time high. Again and again we have watched men and women of color murdered, while their killers walk away-- and are even protected by the very systems that are supposed to protect all of us.

Will you join us this Wednesday at 3pm in Sacramento? RSVP here!

Together, we're a powerful force for ALL our families!