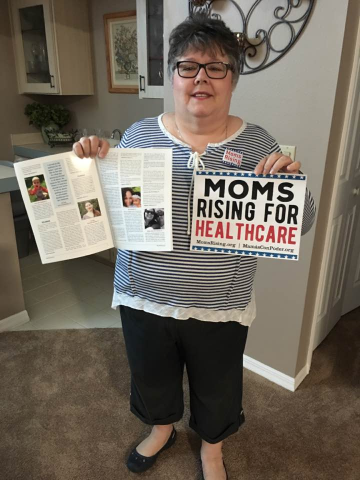 Health Care MomsRising Near You

My mom recently attended our local Representative's townhall to share her thoughts about the ACA. Here's what happened, in her own words:

On February 11, my husband John and I attended the ACA Town Hall held by Representative Gus Bilirakis. We felt strongly about attending and sharing our story so we arrived early to get a seat.

The Center was filled to capacity with a large crowd overflowing outside. Inside, we were asked to complete a form from Representative Bilirakis. It included name, address, concerns and if you wanted to speak. We checked yes but figured the possibility was slim being chosen to talk. His staff was efficient and congenial. They even allowed me to take a picture with them holding a booklet from MomsRising about the ACA. Representative Bilirakis entered the Center walking through the crowd conversing with people along the way even though it was obvious the majority was in support of the ACA. He let the crowd know he was there to hear our stories and that he felt it was his job to hear from his constituents.

The stories were personal and often heartbreaking. People showed pictures of their loved ones and conveyed how the ACA had a positive impact. Some represented groups, others made it clear they were there for their families. Representative Bilirakis listened intently and asked questions.  He stood face to face with each speaker and within the crowd. When the few people spoke who opposed the ACA he listened equally to them. The crowd at times got feisty and loud. People shouted and held signs. Each time they were calmed and asked to give the people a chance to speak. The energy in the room was electric and it was amazing to be part of something so important.

Although I was nervous about speaking, I was determined to tell my family’s story. I wanted to do this not only for us, but for all those who had similar stories that couldn’t speak out.  I was in one of the last groups of people asked to speak.  I had another copy of the MomsRising booklet, which I personally handed to Representative Bilirakis.  I explained to him it was filled with ACA stories of people from all over the country, including my family’s.  He thanked me and said it was important to hear the stories.  Although my heart felt like it was going to burst and I was nervous, I summoned the courage and told our story.

Our family relies heavily on the ACA and without it we’ll suffer grave consequences. We have a daughter (22) and son (19) that are currently in college. Each of us has at least one pre-existing condition. John suffered a stroke at 56 and is now permanently disabled at 59. He had worked for a major bank with an income exceeding $100,000 and excellent benefits. Even so, our medical insurance was expensive with very high co-payments and deductibles. The day before his appointment to discuss health setbacks and the possibility of going out on disability, John was laid off. In the blink of an eye we lost everything – income, insurance, security, etc. We received 10 weeks of severance. Because we needed to maintain all of our insurance, we selected COBRA. The cost was $1,824.67 per month ($1,675.56 for medical). We had no income, nothing left in savings after expenses from his stroke and needed to borrow from our 401K to survive. I had been a stay-at-home Mom for 22 years and didn’t have a paying job. In July, Social Security declared John Disabled and refunded us for two months of payments. The first five months are considered “processing” and you don’t get paid for that time. John receives $2,404 per month but isn’t eligible for any benefits. I’m looking for a job. Through the ACA we pay $197.93 for our medical insurance which is now a better plan than we previously had. Due to current health issues that wouldn’t be covered under a new plan, we had to keep COBRA for Dental and Vision ($149.11 per month). COBRA eligibility ends in July.

Representative Bilirakis was attentive and showed that he really cared. He actually gave me more than the 2 minutes allotted to speak.  I explained all the different reasons why it was important not repeal the ACA. Walking back to my seat I was stopped by a few people thanking me. One said she had been in my position before and was glad I spoke.  It was an amazing feeling.

The Town Hall was supposed to be 2 hours, but it went well over that time.  Not only did Representative Bilirakis speak and listen to the group inside for over 2 ½ hours, he also went to hear from the people outside.

To anyone who has the opportunity to go to a Town Hall, I hope you will do it.  I also encourage you to speak out and let your voice be heard.  Who knows, maybe your story will be the one that makes a difference. Even if the ACA is repealed and not replaced or replaced poorly, you will know that you put yourself out there and didn’t just sit back waiting for someone else to speak for you.  It is empowering not only for you, but for those that hear your story. People often think, what can I do, I’m only one person.  Don’t kid yourself, one person can make all the difference!

To get tips on how to make your Town Hall experience a success, check out this blog post: http://www.momsrising.org/blog/attend-a-town-hall-near-you-to-speak-out-for-healthcare