"My STRAIGHT Son Was Repeatedly Denied Promotions For 'Being Gay'" 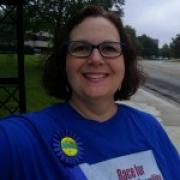 Lyn Herron
Share This
Add your voice to the comments

I love my son. Like any mother, I would do anything for him -- anything to make sure that he can live up to his potential and fulfill all of his dreams. That's why I was completely stunned when my son -- my straight son -- was refused promotions at work for being gay.

I grew up in a small town in southeastern Ohio where everyone looked like me. There was zero diversity in my early childhood. As I moved into junior high, I began hearing words like "sissy," and "dyke"...all describing people I considered friends. After my first year of college, my friend Michelle was the first person who came out to me -- waiting until we had a second alone, and hurriedly whispering, "I'm in love.....with Claire!" I wasn't surprised and, in fact, was really happy for her! That was in 1982.

Years passed and I was always vocal whenever someone would make fun of someone else for being LGBTQI (lesbian, gay, bisexual, transgender, queer, or intersex), but I never went any further than being a supportive friend or attending Columbus Pride. In 2007, my son and I got involved in our local Unitarian Universalist congregation -- which soon became a Welcoming Congregation -- and my involvement in LGBTQI issues exploded!

My first political action was in 2008 when we lobbied our state legislators to pass the Equal Housing and Employment Act. I've since participated in additional lobby days, phone banks, and Pride parades. I'm currently helping to overturn Ohio's state constitutional amendment barring marriage equality in the state.

While I fully believe in marriage equality, the happiness of a union can quickly fade if one or both of the partners is fired or denied employment simply because of who they are or who they love...or who they are perceived to love. This came into stark focus for me when my straight son was denied multiple promotions at the national retail store where he was working. After his manager and other managers in the region lobbied for him multiple times, my son's boss eventually -- out of exasperation -- asked the district manager why on earth Joe wasn't being promoted. The district manager responded, "I think he's gay and there's no room for that here!" Though our son is not gay, he's also been impacted by the fact that there is no federal law (or, in Ohio, a state law) prohibiting workplace discrimination based on sexual orientation or gender identity.

I've recently gotten involved, though, in the national push to pass a bill that would solve that problem. The Employment Non-Discrimination Act (or ENDA) is moving through the Senate now, and has a good chance of passing this fall. I'm asking parents like me -- parents who love their kids, gay or straight, to get involved in making sure that our kids don't grow up with ridiculous barriers like these in their way. It's ridiculous that we're still trying to get this bill passed in 2013, and we need mothers and fathers across the country to get involved -- we need to end workplace discrimination NOW!

If you'd like to join our "Equality Families" campaign by telling your story about why you think workplace discrimination against LGBT Americans should be brought to an end, just sign up here.