My Experience as a Restaurant Worker #LivingOffTips 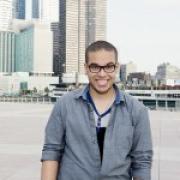 Karl Rivera
Share This
Add your voice to the comments
Last year I worked at a chain restaurant, one that will remain undisclosed. It was a nice establishment, the kind that makes the same food no matter what location you go to, and is consistently lauded for their attention to customers' needs. I took the job in order to pay for my college education and also to help my single mother. Though I am on scholarship, books, lab fees, and art supplies are expensive.
It was an interesting work experience that gave me a greater perspective in regards to social mobility in America... or the lack thereof. There were five things that were made very clear to me while at that restaurant; some things I already knew but didn't quite understand and others made me reevaluate my position in a lot of debates with friends, professors and even family.

1. The lower middle class and working class work harder than any other class.

I don't say this with disrespect toward any other class but when put in perspective I have never seen such intense labor worked with such little return. There is a very popular misconception that the poor are lazy and though I never believed that statement, being a part of their daily process gave me a much greater understanding to their plight. Most of my coworkers worked two full time jobs, making less than most people earn at part time jobs. At my job alone, they were on their feet for at least 8 hours, oftentimes more... Multiply that by two and subtract it from 24 and you get a measly 8 hours to find time to care for your children, shop for necessities, budget the little money you have, and somewhere in between that all, sleep... to then get up and do it again.

2. There is a direct link between class and health.

Much of the political debate surrounding health care revolves around institutions that do and don't provide insurance and though that is a very pertinent and important conversation that needs to be had, we need to start thinking about the way in which jobs contribute to this cycle of poor health, both mental and physical. I have worked in both the corporate sector, and now the food industry, and there is a great divide in the care that is given to employees. Why is it that when I worked eight hours at a desk, sitting down all day, I got an hour break (sometimes more!) but when I was standing on my feet for nine or ten hours, I got 30 minutes to rest? I became so physically exhausted that while having a conversation with my manager I started to fall over. I would literally roll and fall out of bed in the morning, and my words became so jumbled that people no longer took me seriously. This is the start of many, many health issues and is what contributes to preexisting conditions... what insurers deny you for... so sad.

3. College is not the golden ticket out.

We need to stop convincing the youth that they need to let go of their dreams, the excitement they have for art, and the passion they demonstrate for all the things they love that are considered 'impractical'. It is all of those things that employers look for... passion, dedication, and imagination. There were a handful of people working with me who had graduated from college with majors that were considered the best: Chemistry, Biology (on the premed track), Philosophy (with a concentration in law). Having a college degree does not make you stand out anymore. Going to college doesn't set you apart. It is your attitude and your drive and your perseverance in the midst of trials that will ultimately make you different, find you a job, and help you move forward. We need to teach our children that. We need to support organizations that are teaching our children that. My generation, the youth, they are the future and rather than making our future diverse, we are populating it with people who indistinguishable, with college degrees that no longer mean anything.

That is a problem. How can anything be different when we let the people who are supposed to lead us damage us? How can we promote diversity when those who are charged with finding it, hate it? How can we teach others to care for their neighbor when we sit and watch our neighbor be taken advantage of?

5. I will never fully understand.

Though I worked at my restaurant and dealt with all of the issues that I mentioned above, I had a way out. I had a choice. I decided that I didn't want to take the mistreatment, or exhaustion, anymore. I quit. I was able to do so because I have a supportive mother. I am more privileged than I'd sometimes like to admit. I had a choice when so many other people don't. Though I now understand more than most, I will truly never understand what it means to have no other choice other than to accept restaurant workers' subminimum wage of $2.13.

But that doesn't mean I won't fight or use my voice to help others. I resolve to be different. I resolve to take a stand for those who don't think they can on their own. Won't you join me?

If you agree that minimum wage should be raised, please tell Congress to #RaisetheWage!