More is required of us 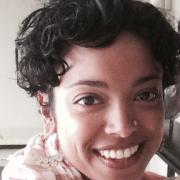 Vanessa Daniel
Share This
Add your voice to the comments

“I think we all know, deep down, that something more is required of us now. This truth is difficult to face because it’s inconvenient and deeply unsettling. And yet silence isn’t an option. And I’m sure that many who refused to ride segregated buses in Montgomery after Rosa Parks stood her ground wished they could’ve taken the bus, rather than walk miles in protest, day after day, for a whole year. But they knew they had to walk. And so do we.” – Michelle Alexander

What more is required of those of us working in philanthropy at this moment in history?

Over the past two years the streets have swelled with unprecedented levels of protest proclaiming “Black Lives Matter” across the U.S. and around the globe. Jesse Williams stood before us, as Alice Walker pens, with “a soul made of everything,” speaking clear throated truth –  a truth about the lethal poison of American racism now being voiced by a growing chorus of celebrities and athletes and everyday people at their dinner tables and on social media.

Perhaps it is because of the herculean quality of this effort, powered by the thousands of people who have found the courage to stand up and say “enough!”, that the executions of Alton Sterling and Philando Castile, by the police, sank our spirits so low. The atmosphere feels thick with the question: why hasn’t any of it been enough?

Last week, my four-year-old daughter happened to open an old photo album to a picture of a rally that my friends and I organized as college students. The rally was in response to the murder of Amadou Diallo, the unarmed African immigrant who was shot 41 times in a hail of bullets by plainclothes police officers in the vestibule of his New York apartment. One of our classmates had grown up in the same building and her family still lived there. We went to her building and stood in that vestibule, in that narrow space with walls riddled with bullet holes, and grieved the loss of Diallo’s life. That was nearly 20 years ago. I’ve lost count of the number of rallies and protests against police brutality that I’ve attended in the 20 years since. Looking at that photo, I felt profound grief. I asked myself, over the past 20 years, what has changed? In the past 50 years, what has changed?

My wife and I spent an evening last week frantically looking through the mail for updated registration stickers for her car because she knows that for her, as a Black woman, a simple traffic stop for outdated tags could end in murder by the police – even when you follow orders, even when you have a four- year- old child in the backseat. Our hearts sink into our stomachs when we look into the bright and open face of our ten-year-old nephew. We know, like his grandmother and great-grandmother knew about the generations of black children before him, that until we win major societal change, there is nothing within our power that can be done to protect him from the police.

It is a difficult question. Difficult for those who would bury their heads in the sand of a “post-racial America” that doesn’t exist. Difficult for those of us who have worked for justice all of our lives and want to believe that the sweat and blood of so many freedom fighters has gotten us further along than we actually are. But it is a question we must ask. And, we must answer truthfully, that, in fact, not nearly enough has changed for racial justice in America. As the push for change intensifies, white supremacy roils and pushes back. Things are actually getting worse for Black people. When things get worse for Black people they get worse for a lot of other people by extension: people of color, women, queer folks and even poor white people.

We can’t stop at the question ‘What has changed?’ There is a more important question that all of us must ask ourselves: what more is required of us? What more can we do to stand up for Black lives and to dismantle the larger systems of racism that underpin not only the murder of Black people by the police, but also the taking of Black lives in less visible ways: through lack of jobs, inadequate schooling and healthcare, lack of access to reproductive justice, unsafe housing – the list goes on.

There are different answers being offered to this question from different groups. Celebrities and high profile athletes are now risking their careers and fame to speak out publicly. Black Communities are mobilizing in larger numbers to do more. More white people are trying to change hearts and minds within their own families by having tough conversations about race, that they used to avoid, at the dinner table.

Today, I raise the question for philanthropy, particularly for white and non-black people of color donors and foundation staff: what more is required of us to advance racial justice? It is a question I have been grappling with as a biracial Sri Lankan/white American working in philanthropy.

I have been fortunate to have worked shoulder to shoulder with white colleagues who have fought for racial justice in the philanthropic sector. I have seen multiracial efforts work to mobilize money for Black Lives Matter, and for women of color-led work;  and to diversify foundation staff and boards. In a field like philanthropy, which is statistically whiter than corporate America and in which white people still hold the vast majority of economic and political power, the movement toward racial justice will be glacial without significant numbers of white colleagues taking concerted action to advance the effort. The hard reality is that although some white colleagues have taken action, not enough have made a commitment to work for racial justice. How do we know this? The state of giving in our field reveals it. The current overall share of philanthropic giving to Black-led organizations makes bank lending to Black families at the height of redlining look generous in comparison.

What more is required of us?

For white colleagues in particular but also non-Black colleagues of color, I challenge all of us to ask ourselves a few questions:

On one point I want to be clear: I am not saying white colleagues should match their colleagues of color in the intensity of the work to fight for racial justice in our field. I am saying they should exceed us. If you cannot honestly answer yes to these questions, if you have been sitting on your hands while Black people are dying, then no matter how good your intentions are, you are part of the problem. If you have been on the sidelines, break time is over. It’s your turn to be part of the solution. You are up to bat.

This may not come as welcome news to many people in our field. Philanthropy coddles and constrains those of us working within it with a culture that is famous for valuing comfort above justice, and the capitulation to the status quo over the backbone to speak up. Many people in our ranks may wish it didn’t feel so hard to stand up and do the right thing, but as Michelle Alexander so eloquently notes, “And I’m sure that many who refused to ride segregated buses in Montgomery after Rosa Parks stood her ground wished they could’ve taken the bus, rather than walk miles in protest, day after day, for a whole year. But they knew they had to walk. And so do we.”