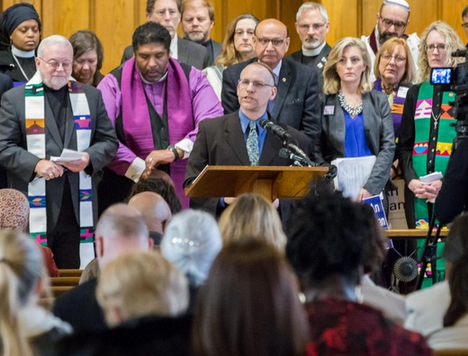 Two weeks ago, MomsRising joined dozens of DC area faith leaders on Capitol Hill to pray together and speak out against the bigotry, systemic racism and white nationalism of Jeff Sessions, Trump's nominee for Attorney General.

Now, civil right leaders and interfaith clergy are planning a Moral Monday March to the Capitol on Monday, January 9th.Will you join us?

We march on Monday, because on Tuesday, the US Senate begins hearings on Jeff Sessions' nomination to Attorney General.

We march because Sen. Sessions has a history of racist rhetoric, and was even rejected by a Republican Senate Judiciary Committee over his troubling record on basic civil rights.[1] As a U.S. Senator, he has repeatedly opposed legislation that make our nation more equal and more just, including the Voting Rights Act and the Violence Against Women Act, [2] but has defended banning all Muslims entering the United States.[3] Sessions’ recent embrace of policies that oppose birthright citizenship and legal immigration are deeply disturbing from a man who would be the chief legal defender of the rights of all Americans as the U.S. Attorney General. [4]

We march because we cannot stand idly by as bigotry, systemic racism and white supremacy are being normalized and elevated to such power!

Who: All righteous people who oppose Donald Trump’s efforts to use his Presidency to normalize and elevate bigotry, hate and systemic racism

Would you also please share this invitation with your family members, friends who might join the march?

Together, we’ll never stop fighting against bigotry, racism and hate, and fighting for a nation that lifts us all.