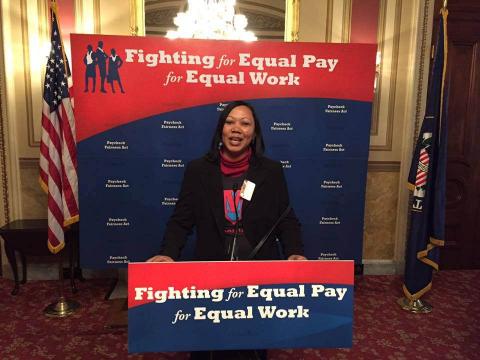 [IMAGE DESCRIPTION: Person with shoulder length black hair stands in front of backdrop and behind a podium that both have the words "Fighting for Equal Pay for Equal Work" in white lettering on a red and navy blue background.]

Today is Equal Pay Day, which marks how far women in the United States have to work into 2018 to catch up to what men, on average, were paid in 2017 alone. This frustrating annual ritual is a reminder that our country still has a long way to go in closing the wage gap, reaching economic equality and improving financial security for working women and their families.

The Equal Pay Act was enacted more than 50 years ago, yet women are only paid, on average, 80 cents to every dollar paid to men. Women of color experience an even more punishing wage gap: Black women are paid just 63 cents for every dollar paid to white, non-Hispanic men; Latinas just 54 cents; Native American women just 57 cents; and Asian-American and Pacific Islander women just 87 cents, with some Asian-American subgroups paid much less. Mothers face big wage hits as well, earning an average of 71 cents to a white dad’s dollar. Disaggregating the data shows that single mothers and mothers of color see even greater wage hits.

The wage gap is terrible for families – it hurts women’s income, purchasing power and upward mobility. At a time when many moms are the primary or only breadwinners for their families, this persistent wage discrimination is devastating. But the wage gap isn’t just bad for women and moms – it’s also bad for our economy. When women lose income, it’s harder for them to start and sustain their own businesses and make the purchases that fuel our consumer-driven economy.

Many write off the wage gap as a consequence of women’s career choices, but that’s simply not the case. Women of all education levels, occupations and industries are paid less than their male counterparts. And our country’s workplace policies – which deny many workers paid family and medical leave, affordable child care and earned sick days – often force women to make choices that hamper their career trajectory and earning potential.

It’s time for lawmakers to take action. The administration needs to show its commitment to fair pay by urging the EEOC to implement a replacement for EEO-1, an important pay data collection initiative that helped create transparency around wages and prevent race and gender gaps from being ignored. Congress should pass the Paycheck Fairness Act, a much-needed update to the Equal Pay Act that would increase pay transparency and strengthen penalties for wage discrimination. We also need family-friendly workplace policies – including paid family and medical leave, affordable child care, earned sick days and a living wage – to help close the wage gap and boost our national economy.

When women suffer, our whole country suffers. We can’t wait any longer to do what’s right for our families, our businesses and our economy. It’s time to close the wage gap once and for all.