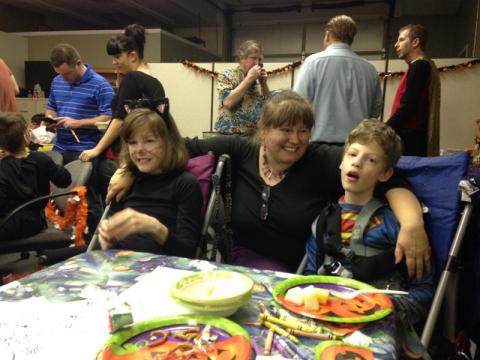 Mom Amy and her twins

Moms Tell Their Stories About Medicaid

We have heard from hundreds of parents from around the country on how important Medicaid is to their families. Their stories range from moms who used it when their babies were delivered early and ended up in the NICU to parents of the Sandwich Generation who need it to care for their elderly parents. These stories carry all the more weight this week as Congress gears up to vote on a budget that slashes funding to Medicaid and makes major changes to the program that would likely result in loss of coverage for millions of families.

Please read the stories below (and share with your friends and family) and then write your member of Congress and ask them to protect Medicaid for these families and the millions of others like them.

“My twins were born at 24 weeks gestation 12 years ago.  Medicaid was important to my family then so that we were not financially crippled by their 4-month NICU stay.  After discharge, Medicaid (through the Katie Beckett Waiver) picked up the cost for the earmolds when they were fitted with hearing aids a month after leaving the NICU.  And it covered the co-pays for the extra doctor visits and medications my children needed.

Since then, Medicaid has been the lifeline that pays for the therapies and equipment so my children have a chance to develop and reach their full potential-- therapy for my son's Autism, my daughter's cochlear implant, CNA help with bathing and dressing both kids, to name but a few.  Medicaid has spent a lot of dollars on our family.  I can assure you that not one penny of that has been wasted.  I cannot imagine how our life could function without Medicaid and the services it pays for.”

“Two years ago at 31 years old with an infant and a toddler, I had two strokes. I am a family physician but suddenly we couldn't afford medical care. I was so grateful for the safety net (Medicaid) that provided my husband, two kids, and I with medical care right when I needed it the most. It is underhanded and shameful for Congress to try to prevent access to care for the most vulnerable: young families, the elderly, the disabled, and those who have found themselves in hard times.

As a physician, I promise to first do no harm. It seems that as a politician the motto might be to first harm those who you don't think will be able to speak up for themselves. How is it we raise our children to protect the weak and vulnerable but as adults it's apparently considered acceptable to no longer do so?”

“As a single mother on disability. I could not afford to take my daughter to specialists for all her health problems. When she qualified for Medicaid last year we were finally able to see a specialist that gave her a diagnosis of a genetic disorder to guide us in the right direction to help her. It also meant I myself (without insurance) was also diagnosed as well by the specialist as having passed her the defective gene. Wow! What a great gift having Medicaid has been. For most her life she has suffered with severe problems and now we finally know why and can afford to treat her and continue to evaluate her for problems that could be lurking or life threatening tied to this rare disorder.”

“My son and his wife have a beautiful 15 month old son. He is the apple of my eye. My son is seriously ill. If it were not for Medicaid my son would not be able to go through the treatment on his liver that would save his life. While my son can't work, my grandson  receives Medicaid also. We need Medicaid to save my son's life. We need it so my grandson isn't left fatherless. My grandson is able to receive his immunizations through Medicaid. Well child checkups are keeping my grandson in good health. What would happen to my family if Medicaid were not available???”

“When I was 12, I was in a serious accident: broken neck, broken ribcage, punctured lung. My family was on Welfare and Medicaid paid for 10 days in hospital and months of physical therapy. If I had not had expert medical care, I would have died. 5 years after my accident, I was a national champion gymnast. Welfare and Medicaid were essential not only to our family's survival, but it enabled me to go to college and become a self-sufficient member of society. Our family of 5 could not have survived on my mother's teacher's salary without the help.”

“My son was born with congenital heart defects. He had his first surgery at a week old, and was kept in the hospital for almost a month. He had open-heart surgery after a simple cath procedure didn't work when he was only 5 months old. Again, he was in the hospital for almost a month. He is now 5 years old, and he has a couple of other issues with his heart that his cardiologist is monitoring closely. He goes to doctors visits at least 3 times more than the average child. If we did not have Medicaid for him, I honestly don't know what we would do. The thought of losing his Medicaid TERRIFIES me. My son will have to be closely monitored by his physicians for the rest of his life. I pray that he does not lose his health insurance.”

“My sister, Donna, was born with Prader-Willi symdrome.  She has comprehensive services through the state of Colorado and is a recipient of Medicaid.  I am her older sister and sole legal guardian.  I could not care for Donna without this help.  She is a sweet person who works two jobs to meet her other expenses and contribute to society.  She also pursues her love of acting with the Physically Handicapped Amateur Musical Actors League (PHAMALY) of Colorado.  She is a very special person and I am honored to be her sister.”

“My 2 1/2 year old has a severe developmental delay caused by a seizure disorder, Lennox Gestaut syndrome. He has multiple seizures every day despite the best medicines available. We have good insurance through my husband’s job, but without Medicaid the copays on his therapies would be nearly $100 a week.  It would be incredibly hard to afford, especially since I need to stay home to care for him. You would probably not be surprised that it is hard to find someone willing to babysit a child with frequent seizures. Medicaid helps us make ends meet. It also comforts me to know Medicaid will be there for him when he is grown. It is unlikely that he will ever be able to live independently. Please don't cut Medicaid. Special needs families have stressful lives, please don't make them even harder.”