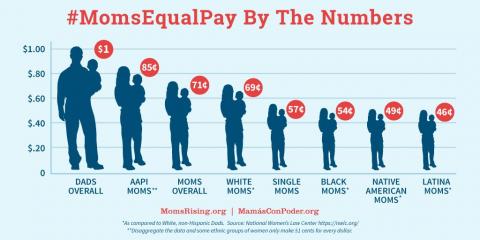 [IMAGE DESCRIPTION: A chart describing the wage gap experienced by mothers of different races and ethnicities.]

Today marks how long mothers in the United States have to work into the new year to earn what fathers were paid in the previous calendar year. In every single state, moms are paid less than dads. That is disgraceful. This persistent wage discrimination doesn’t just hurt moms -- it causes great financial insecurity for families and damages our economy.

Our country claims to value mothers, but these numbers reveal the truth: Women are punished financially when they become mothers. In fact, becoming a mother is now a greater predictor of wage and hiring discrimination than being a woman, and it puts moms at a lifelong economic disadvantage.

It’s time to stop just paying lip service to moms. Our elected officials must take real action to close the wage gap. Moms are a powerful force for change in this country, and we will continue to speak out until we achieve fair pay and equal opportunity in the workplace.