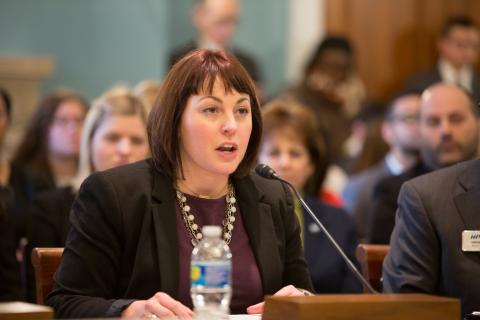 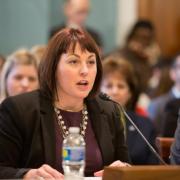 Erika Tebbens
Share This
Add your voice to the comments

When my son Jack was born, I was married to a Culinary Specialist at the Bremerton Naval Hospital in Washington. He was an E4, after enlisting as an E3, and we were proud of his solid ranking. I have a bachelor’s degree, and before we moved I had nearly completed a master’s degree in secondary education.

I left a $30,000/year position as a teacher when we were assigned to the Kitsap Peninsula. The job prospects in our new town were bleak, and I was constantly told I was “overqualified” in interviews. I finally managed to secure only part-time employment in two positions – as a bank teller and as a baker at a diner. I was working 35-40 hours a week but making half my previous salary.

When we found out I was pregnant we were barely making ends meet. Thankfully we were good cooks with plenty of knowledge about healthy eating. Even while sticking to affordable staples like beans and rice or vegetable soups, our grocery bill was awfully high. I struggled with having to choose between healthy, nutritious food and processed, cheap food.

A coworker happened to mention the WIC program to me. I had never heard of it before. I was certain as a military family we wouldn’t qualify, but I made an appointment at our local WIC office anyway. The office was in a private building in our town, not on the base. That meeting was quite enlightening. I learned that it’s quite common for civilian OBGYNs to give information about the program to pregnant women. But I never heard it mentioned once in all my visits to the military hospital.

The pre-screening process for the WIC program was fast and simple, and the women working there were knowledgeable and supportive. To my surprise, we qualified, and I learned that this is true as well for many military families.

I used the WIC benefits while pregnant and continued to search for a better paying job, but just kept hearing that I was “overqualified.” I also suspect no one was interested in hiring a woman who was very visibly pregnant.

Our son Jack was born in November 2004. He had to be delivered via caesarean section, meaning I was not allowed to work for six weeks. Once I was medically cleared to return to work, I could only work shifts on Saturdays, when my husband wasn’t working. There was simply no way we could afford childcare, and, like so many military families, we had no local support system.

Our financial challenges with an infant mounted, and I ran out of solutions. I reluctantly applied for SNAP benefits and was denied. I felt confused, scared, and ultimately dumbfounded. How could we qualify for one government food assistance program, but not another? Why didn’t we qualify for SNAP when we were struggling to put food on the table for our family?

Although both the WIC and SNAP programs fall under the USDA, the WIC application specifically excludes additional military allowances, such as the housing allowance, as part of your monthly income. The SNAP program, in contrast, does require counting our Basic Allowance for Housing (BAH) as income when applying.

Most people don’t realize military families often acquire housing in a different way than their civilian counterparts. On the whole, our military subsidizes housing expenses for active-duty military families, whether you live on-base or off. If you reside in off-base or privatized military housing, the subsidy is determined by the cost of living in your area. But including the BAH as part of determining eligibility for government programs, which only happens if you live off base or in privatized housing, artificially inflates a family’s gross income. So that’s what happened to us.

We were rejected because our housing allowance was included as part of our income, which made it seem like we were making more money than we were. I’ve since learned that this is a common reason why military families are denied access to SNAP benefits.

We were left wondering how we were going to survive even while my husband went to work serving his country.

After being denied for SNAP, I didn’t know what else to do. There weren’t any other options for our family. When we moved, there was a wait list for on-base military housing so we chose an apartment that was under our housing allowance in an attempt to make ends meet. We also shared one used car, and lived without cable or other amenities in an attempt to get by.

We were making payments on my graduate school loans, which also weren’t considered in benefit eligibility. As a responsible adult, I pay my bills. I wasn’t going to just stop paying. For some time I had them deferred, but that was only a temporary solution.

I breastfed Jack exclusively until he was six months old, but the costs of having a child piled up. Diapers, wipes, and other necessities were a constant strain on our budget. We shopped the commissary, because it was cheaper, but our food bills were still more than we could afford. I remember putting groceries on the credit cards more times than I could count. There are few things more disheartening than worrying about where your next meal is going to come from.

My life – and my son’s life – are much better now. All debts from that time have been paid, and we are food secure and living comfortably. I was able to leave the WIC program after I went back to work full-time when Jack was about 18 months old. We can now afford to give generously to various charities and donate to our local food pantries. For four years, I managed a local farm that accepted WIC and SNAP benefits. I lived the experience of stretching each dime, so when people shopped with my farm, I would go to great lengths to help them make the most of the meager benefits.

Being in a military family is challenging in ways most people can never imagine. You make so many sacrifices: missed time with loved ones; not having a constant place to call “home;” job security for dependents; and so much more. I don’t ever want another military family to worry about food the way we did.

If we had been of a lower rank, I honestly don’t know how we would have survived. No military family should have to experience the fear and shame of being food insecure, but we should also be giving them the resources and information to get help.

I hope that these reflections from my personal experiences, and the other stories that follow collected by MAZON: A Jewish Response to Hunger, help you to better understand the particular challenges of food insecurity faced by too many of our military families.

Erika shared the above testimony with the U.S. House of Representatives’ Agriculture Subcommittee on Nutrition hearing about military families and food insecurity back in January. To see the full hearing, go here.