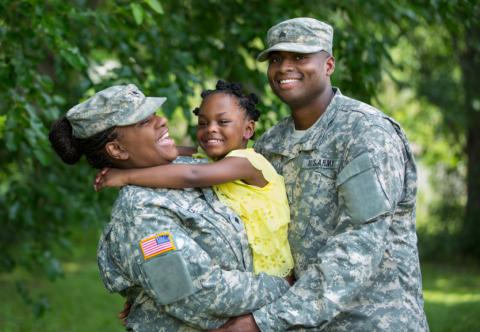 #MilitaryMonday: How filing your taxes can boost your military family!

It’s coming up. Are you ready? The IRS offers lots of resources for military families, including how to get free tax prep on bases. In addition, you can find the closest Volunteer Income Tax Assistance (VITA) site to you by going here: http://www.unitedway.org/myfreetaxes. VITA sites offer free tax help to people who generally make $54,000 or less, as well as persons with disabilities and limited English speaking taxpayers. There are also military-based VITA sites that can help all military families with tax preparation.

On top of help preparing your taxes, you should make sure to see if you are qualified for the Earned Income Tax Credit (EITC) and Child Tax Credit (CTC). 1 in 4 active military and veteran families receive the EITC and CTC. This extra money helps our families make ends meet throughout the year and pay for things that otherwise might be unaffordable like a car to get to work, a place to live, shoes for our kids, and other necessities. And by making those purchases we are funneling money back into our local economy, which sorely needs it. In short, these policies boost our families and our economy.

We have heard from many moms who have been greatly helped by the money they received from the EITC and CTC. Moms like Lynda who writes, “We used the EITC and Child Tax Credit when my husband was serving in the United States Air Force and after he left the military and we were both working full-time jobs in the civilian job market. It helped us make ends meet and we were extremely grateful that these tax credits were available to us.”

We had a major victory in the U.S. Congress last year when lawmakers made key provisions of the EITC and CTC permanent—meaning military and veteran families can continue to benefit from this excellent anti-poverty, pro-work, pro-military family program!

Still, there are some improvements that still can be made to our tax code that could help military families. 40% of active duty service members have children, which means there are more than 1.8 military kids in the U.S. The largest group of these military kids are children under the age of five. Military families would be able to better make ends meet if Congress made key changes to the CTC for families with children under the age of six. As we all know, kids are expensive, but very young children are especially expensive—the cost of diapers, doctor’s visits, and childcare alone could set a family back!

And speaking of childcare, childcare costs are sky high, costing more than college in most states! Military families are also feeling this stretch! (In fact, MomsRising and the National Military Family Association had a great tweetchat a few weeks ago on this subject!). Major improvements need to be made to our childcare and early education system to better help military families and their special child care needs. One place to start would be to make improvements to the Child and Dependent Care Tax Credit (CDCTC). This could help millions of families better afford quality childcare for their little ones.

While you are filing your taxes and have taxes on the brain, so does Congress. Congress may well consider major tax reform legislation in the next year. Policymakers in both parties want to make big changes in our federal tax code. We want to get in there early with our signatures and stories and make sure that our lawmakers know that tax reform isn’t just for wealthy corporations and individuals but children and military families too!

Take Action!
Take a few minutes to reach out to your members of Congress and tell them to “make our tax policies work for military families!”