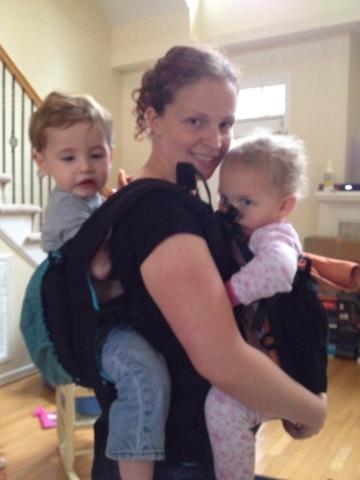 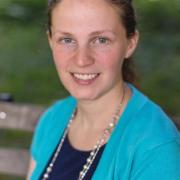 Kit Jenkins
Share This
Add your voice to the comments

If you ever want a look at what breastfeeding is like, there is a book called “The Places You’ll Feed" by Lauren Hirshfield Belden. The book is an adorable Dr. Seuss parody but touches on everything from latching, pumping, traveling, and everything in between. I remember seeing it come across my Facebook feed a few years ago during World Breastfeeding Week, and it stuck with me. While I was pregnant with my first daughter, I read pretty much every book, blog, magazine or article I could get my hands on. I made strong statements of “I’ll never do that!” (And then I probably did) and “Well that’s just gross!” (nope, probably did that too) and even “Who nurses past a year?” I do, that’s who.

At first I decided that if I could breastfeed, I would, because it would save money. The same reason we cloth diapered, shopped second hand, only drove one car, and so on. My first daughter was born at term, and her dad left 10 days later and then I was on the other side of the country from family all by myself with this adorable thing that wouldn’t. stop. screaming.  My mom didn’t really breastfeed, and my grandmother had but she died while I was pregnant, and I had one aunt who had two kids and nursed them both. Her advice was pretty much “When in doubt, put a boob in its mouth.” It generally worked, except after nursing it would scream it’s tiny face off and start vomiting. After a few trips to the emergency room because I was convinced she was dying and then after meeting my local babywearing/cloth diaper community, it was suggested that she had food allergies. I asked my aunt and she said, “I suppose it’s possible. We’ve dealt with a dairy allergy here…”

It turns out, after an elimination diet (which pretty much means you only eat a few things at a time until you figure out what the triggering foods are) we discovered she was allergic to dairy (not to be confused with lactose intolerance. She was a physical reaction to Lactose, Casein, and Whey) and had a significant gluten (wheat, rye, barley) sensitivity. As soon as I cut both out, there was no more screaming off of the tiny face, no more exorcist-esque vomiting, and generally much peace in my house. The only other person from my aunt I’d known other than my new community who had dealt with a food allergy had stopped nursing and switched to soy formula, and then soy milk. I figured that since my boobs were doing their job so well, I’d let them keep at it, and cut both categories from my diet. Through trial and error, we discovered we could use goats milk (as long as it wasn’t blended with cow) products and also sheep milk products.  Because it was just her and I in the house, it didn’t matter if we had corn chips and guacamole for breakfast and oatmeal for dinner, because there were no rules. However, eating out or eating around other people was a challenge because when you don’t have food allergies, the ingredients in your food can be taken for granted. You can stop anywhere and order anything. 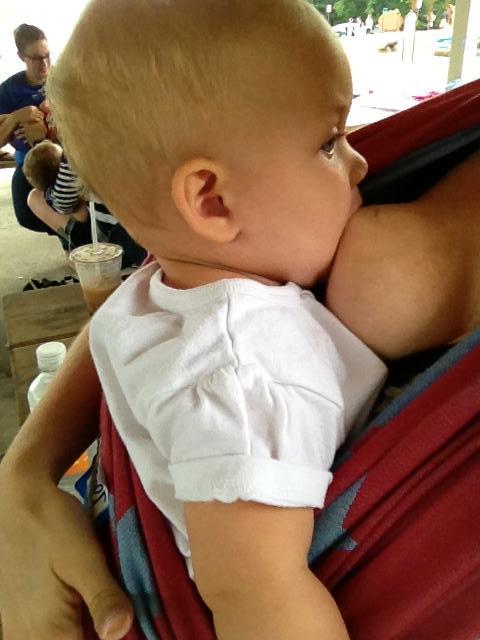 Not us. We traveled quite a bit while my husband was deployed—weddings, funerals, a vacation, all sorts of adventures. She was a great sleeper and I wore her in a carrier so she could sleep or eat and I could move about the universe. We were sometimes those people who brought our own food and sometimes those people who demanded the chef come to the table and play 20 questions. We did pretty well and rarely got “poisoned,” even after my husband returned from deployment and had to adjust to our new dietary adventure. He likes to cook, so he took it on well and we did alright. At about 15 months the baby slowly outgrew her gluten sensitivity, first everything was ok except wheat and then finally wheat was okay too. Nursing for her was not only a comfort thing, but also meant that she had a guaranteed source of nutrition that was safe for her wherever we were. I read every label, taught my husband and eventually my mother, and anyone else who spent regular time with us at least knew to ask even if they didn’t necessarily know how to provide without guidance.

I was soon pregnant with what would be a second daughter, and at the end of the first trimester my milk dried up, and at what I felt was a respectable 18 months, my first daughter was weaned. It was a borderline traumatic experience for both of us, but since the milk was gone, it passed quickly. I was briefly able to eat mostly anything the fetus would tolerate and I joked with my husband that the next one would be allergic to soy and eggs, the other two common allergies that are in pretty much EVERYTHING. The doctors assured us that it was incredibly unlikely that the second child would have food allergies, there was no way it was genetic, and so on.

Thanks TRICARE, and thanks to my own big mouth. Baby #2 came shrieking into the world at 37 weeks on the nose, after a tumultuous 6 weeks of us playing chicken with Labor and Delivery and begging her to stay in and keep cooking. 5 pounds and 8 oz of baby on a 17 inch frame was almost swallowed by pregnant and then nursing breasts, but we made it work. We fought poor latch (I mean, when your food source is bigger than you are, I’m sure it’s difficult) and positioning issues and were fast friends with the local LLL leader, who ran an AMAZING group on base. After about a week, we knew something was up, and first dropped dairy, and then gluten a few weeks later.  She was mostly better, but still had issues that we weren’t sure if it was a foremilk/hindmilk ratio imbalance, an immature gut (even for a baby, because she was early), or something else I was eating.

After a few months, we pinpointed what was giving her an awful stomachache and then a rash. It was soy. I didn’t consume very much soy out of an intentional avoidance, but my most common source was the chai latte from Starbucks. Well, that had to go. We did a similar elimination diet approach, discovering that it wasn’t ALL soy, just soy protein, which in the food allergy scenario is a lifetime of difference. Soy in general is in pretty much everything between soybean oil and soy lecithin. Thankfully, neither of those bothered us, it was only a protein allergy, so that meant no soy milk, soy beans, items thickened with soy protein, no soy sauce, etc, The change was night and day, and she was soon 100% happy, rash free baby, as long as we were vigilant.  That one slipped us up more than the other two ever did combined, as it was the hardest to keep track of. We pretty much lived at Chipotle if we wanted to eat out, and otherwise made things in house. We were very lucky to be living right outside of Washington, D.C., so we had access to more allergy friendly grocery stores and restaurants were getting better about labeling, but it was definitely hard. Piper nursed until she was 2.5, and because she was so tiny, the pediatricians encouraged us to keep it up as long as we could. She was starting preschool and I was getting touched out, so it seemed like a good time to wean, and while it was hard, we did it. The group of friends I found in the Babywearing community there in D.C. were so supportive, even when my husband was gone for 7 months (right at 5 months, so not too long after we identified the soy trigger, until right before her first birthday, and my other dairy free child was 2.5-3) and helped make food, source premade items to make our lives easier. Thankfully we DID get to keep eggs, so we ate a lot of those while he was gone!

Nursing can be hard without support, and nursing a baby with food allergies can sometimes feel dang near impossible, especially with all of the misinformation both floating around the internet and sometimes even from healthcare providers. I have encountered several mothers who would have continued nursing through an allergy but were told that a lactose allergy meant they were also allergic to the mother’s milk, which is NOT the case. I have run into people who were told they simply wouldn’t make enough milk if they didn’t eat dairy, because you need dairy to make milk… also entirely false. Ask any nursing vegan ;-) While switching to formula is a personal choice that everyone should make for themselves, especially when it comes to seeking out soy formula or allergy-safe formula such a Neocate, but it needs to be a decision based on good information and current science, not a misunderstanding or bad knowledge. Tongue ties, lip ties, a poor latch, or a fore/hindmilk imbalance are all common issues that lead to a complex nursing relationship, but food allergies are not as rare as people think, and are something that can definitely be worked around with good information and more importantly, good support. If you think you are nursing a baby with food allergies, consider talking to a pediatrician, ICBLC (Internationally Certified Breastfeeding and Lactation Consultant), or LC (Lactation Consultant) for guidance. Thanks to research and an excellent community, I had fantastic, meaningful, and relatively easy nursing relationships with both my daughters, and in addition to helping with comfort, it was able to help fill a nutritional gap both long term and in situations where there was nothing else she could eat that was safe for her.