#MilitaryMonday: A Mom’s Reflection After Orlando 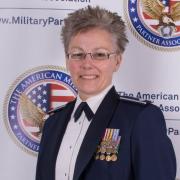 There are many facets to my identity, what makes me who I am: I am a retired Air Force officer, a wife to an active duty Air Force member, I’m a lesbian, an activist for equality and social justice, and an American patriot. But first, and foremost, I’m a mom, to a wonderful 4-year-old little boy for whom I would literally give my life to keep safe. And I remember the exact day that I grew deeply fearful— fearful that I may not be able to keep my son safe, fearful that the mostly orderly, secure society that I had grown up in, that I had served and defended, and that I wanted my son to grow up in, was lost. That day was December 14, 2012, when I heard about the mass murder of kindergartners, 6 and 7-year old children, and their dedicated teachers. My heart broke into 26 pieces that day, and I honestly don’t think it ever was fully put back together. Now, every time I hear about losing a child to gun violence, those same fractures reopen and my heart breaks into those 26 pieces all over again.

I think it’s important to know that I’m very familiar with firearms. In high school I was on a competition shooting team. In the military I also participated on competition shooting teams and was a qualified expert on several different weapons including the M-16. I’m not afraid of or intimidated by guns. Actually, I think it’s because of my training and experience with guns that I have such a healthy respect for them, why I understand just how critical it is to handle and store them properly and to have proper training in their use.

And I want to be very clear that I believe in our Constitution and in the 2nd amendment. In fact we have a rifle in our home. And I know there are very good people who have very strong disagreements about what that amendment really means. I personally don’t believe it was intended to bestow an individual right to gun ownership, and our nation’s highest judiciary supported that interpretation for decades, until the Heller decision in 2008. But even if you believe in an individual right of ownership, I think most Americans can agree that right is NOT inviolate, otherwise we’d have to allow people to own grenade launchers and M-60s! Even Justice Scalia, the most conservative of judicial icons, wrote in the Heller decision that no such individual right exists that is not susceptible to strict regulation by the government: “Like most rights, the Second Amendment right is not unlimited. It is not a right to keep and carry any weapon whatsoever in any manner whatsoever and for whatever purpose: For example, concealed weapons prohibitions have been upheld under the Amendment or state analogues. The Court’s opinion should not be taken to cast doubt on longstanding prohibitions on the possession of firearms by felons and the mentally ill, or laws forbidding the carrying of firearms in sensitive places such as schools and government buildings, or laws imposing conditions and qualifications on the commercial sale of arms.”  I think most Americans would agree that right now we do NOT have strict regulation of firearms in this country. In fact, firearms are significantly less regulated than cars, and in fact are less regulated than TEDDY BEARS!

There ARE things we can do that WILL make a difference. Let’s start with a discussion about allowing and funding studies of gun violence so we can be better informed of the causes and what solutions may actually work. Research into gun violence has been blocked for the last 20 years! Why  – what are we afraid of discovering?

And let’s talk about what types of weapons should be allowed for ownership – do average citizens really need a weapon that can be folded up small enough to fit in a man’s waistband, and when unfolded can fire 24 shots in 9 seconds? (That’s how fast the Orlando shooter fired!)  The Sig Sauer MCX the Orlando shooter used is very similar to the AR-15, and both were designed as military weapons. The MCX was designed to be lightweight, easy to handle, easier and faster to fire than the AR-15 (this is how the manufacturer markets it). It’s a highly effective killing machine, so why in the world should average citizens own them? Do you really need a weapon like that to kill a deer or defend your house from an intruder? Various polls confirm that approximately 60% of Americans agree that assault style weapons should be banned. While a ban on them probably won’t stop all the killings, it will almost assuredly slow the tide and contribute to fewer casualties per incident.

Let’s talk some more about who should be allowed to own guns. It’s easier to buy an AR-15 in this country than it is to open a checking account. I have to undergo a background check to be a high school basketball referee, shouldn’t I have to undergo one to own a gun?  Do we really want folks with severe mental illnesses, felons, or domestic violence perpetrators owning guns? Let’s talk about mandatory waiting periods, and temporary mental health gun holds so people have time to cool off and think rationally. Right now I can buy an assault style weapon in less than 15 minutes in some states. Is that really a good idea? And do we really want CHILDREN owning guns? We don’t allow kids under the age of 18/21 to buy cigarettes or alcohol (for good reasons), do we really think they should own a gun? How about someone who has demonstrated a propensity for violence, do we really want them having easy access to such a deadly weapon? Finally, in the last year alone, people on the terrorist watch list attempted to purchase guns 244 times, and were SUCCESSFUL in 223 of those attempts! Why is this even a question?

And please, let’s talk about safe storage requirements – we mandate that parents put children in child safety car seats, shouldn’t we make gun owning parents store their guns in a safe manner that keeps access away from children? Is this really controversial?

Let’s talk about some mandatory training and licensing requirements prior to ownership – if we think that’s appropriate for car ownership, shouldn’t it be appropriate for owning something as dangerous as a gun? Training would certainly reduce the number of accidental discharges and perhaps make people more conscientious in how they stored and transported their guns? And shouldn’t people who own something so dangerous be required to carry insurance for it, like we do for cars? I’d wager the insurance industry would become extremely focused on studying and determining risk levels for gun owners, and would set their rates according to those risk assessments.

Finally, can we have a serious discussion about the open carry trend we’re seeing everywhere? When I walk into a grocery store and see someone with a rifle of any kind strapped on their back, or a pistol on their hip, it doesn’t make me feel safer. In fact, I turn right around and take my son out of there! I’m not spending any time doing the good vs bad guy threat assessment. Do we really think it’s a good idea for people to walk around in public places like stores, parks, theaters, even schools, with guns openly displayed? What purpose does this really serve? If something criminal were to occur, do you really want these people, most of whom do not have the type of training necessary to truly help in those situations, trying to intervene?

But at the end of the day, can we stop talking and start DOING SOMETHING! Can we stop sending thoughts and prayers to victims and families and start implementing solutions? Can we stop arguing about what the perfect solution is and start finding admittedly less-than-perfect solutions that will at least help? Can we acknowledge that things have gotten out of hand, and start taking real steps towards fixing it? As moms, can we rise up and do something to stop more of our children from being lost?!