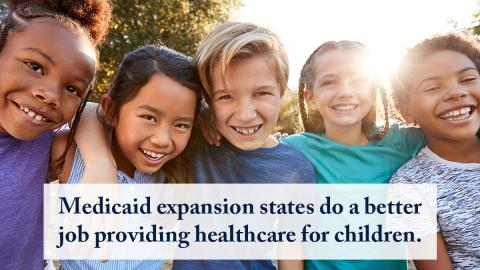 We’ve been tracking the rates of uninsured children for more than a decade now, and after reaching an all time low in 2016 nationwide, the number started going in the wrong direction over the past three years. From 2016 to 2019 approximately 726,000 more children became uninsured. Children are twice as likely to be uninsured in states that have not expanded Medicaid and the gap is growing. The report we released today looks more closely at this increased concentration of uninsured children in states that have not expanded Medicaid to parents and other adults.

This data was collected pre-pandemic and the situation for children and families is likely worse now. With many parents losing their jobs and their health insurance, those living in states that have not expanded Medicaid struggle even harder to find affordable health coverage as the safety net is not there to catch them.

While Medicaid expansion was designed to help the large number of uninsured adults who could not afford private insurance, the welcome mat effect for children when their parents are covered has been documented for some time. When parents gain Medicaid coverage, they are more likely to get the help they need to be healthy and effective parents, more likely to enroll their children in “whole family” health coverage, and more likely to take their children to the doctor. Medicaid coverage also protects families from the economic strains associated with medical debt, and lays the groundwork for optimal child development.

Conversely, when parents don’t have coverage, the likelihood that children are uninsured grows. And increasingly the troubling trend of more children becoming uninsured is happening in states that are keeping their parents uninsured as a policy choice. Think of it as an “unwelcome mat” effect.

Additional key findings from our report:

A growing body of research shows that state Medicaid expansion decisions have significant “follow-on” effects for children, mothers and families as a whole. Our report summarizes the research that has appeared in the last few years in peer reviewed journals. Medicaid expansion has been shown to improve preconception and prenatal care, including increased use of folic acid supplements, critical health screenings, and mental health services. Expansion is also associated with lower maternal and infant mortality rates.

Put simply, making sure all parents and lower income adults can access quality, affordable health coverage regardless of their job or income level not only helps those in the coverage gap access health care but also improves the health and well-being of families and children in multiple ways.