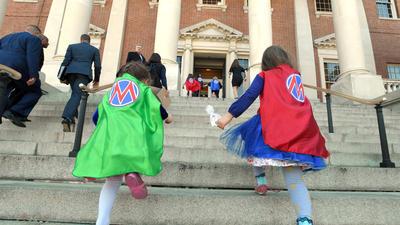 MomsRising kids clamber up the stairs of the Maryland State House on their way to deliver stories and signatures in support of the Maryland Healthy Families Act. photo credit Lloyd Fox/Baltimore Sun

Maryland! We've got a lot to celebrate!

The 2016 Maryland legislative session came to an end at midnight on Monday, April 11th, and disappointingly, the Healthy Working Families Act did not pass. But we came so close, and we have a lot to celebrate.

Let’s take a moment to thank all of the state legislators who voted YES on the Maryland Healthy Families Act because we need them to vote YES again next session.

And let’s take some time to reflect on how we got here and what comes next.

For the last four years, MomsRising members have been fighting hard to win earned paid sick days for the over 700,000 working Marylanders, including many MomsRising members, who are unable to earn even a single paid sick day. Why? Working people shouldn’t be forced to choose between going to work sick (or sending a sick child to school) and risking losing a day’s pay or possibly even their job, if they stay home. That’s bad for families and bad for our economy.

Whether it’s walking pneumonia or the flu, germs happen and kids and parents get sick. It’s just a fact. This is why allowing people to earn paid sick days as they work is pure common sense!

Here is a list of some of the things we’ve done together over the last four years to win paid sick days in Maryland:

We made tremendous and unprecedented progress this legislative session. It’s time to take a moment to celebrate and to send a thank you note to the 84 members of the House of Delegates who voted in favor of the Maryland Healthy Working Families Act!

Thanking them now is important because we’ll need them to vote YES again next session!

Make no mistake – we WILL be back to do it all again next session because we will not stop fighting for the over 700,000 Marylanders, including many MomsRising members, who are unable to earn even a single paid sick day.

Be sure to check out this 3-minute video of our Superhero delivery in Annapolis this year. If you’ve ever wondered what happens after you click a link or share your story with us, you’ll want to see this!

Together we’re a powerful force for women and families in Maryland. (And if you haven't yet, check out our Facebook album for some of the cutest, most inspiring pictures you'll see today!)