Make Your Mom Proud: Spread the Word about Medicaid and CHIP! 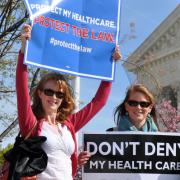 Being a mom is one of life’s greatest experiences, but nobody will ever say it’s easy.  Being entrusted with the health, safety, and well being of a child is the ultimate responsibility, one that no mom takes lightly.  No mother wants her children to be sick and unable to get the heath care they need and at the same time every mother lives in fear that she might become ill or injured and unable to care for her children. Getting health coverage can be difficult, but there is now reason for new hope.

Over the last few months, as open enrollment in the new health insurance marketplaces came to a close for the year, there has been a lot of good news about the millions of Americans who have signed up for coverage--8 million gained coverage through the marketplace and nearly 5 million enrolled in Medicaid or the Children's Health Insurance Program (CHIP).  The opportunity now is to reach the millions of mothers and children who have not yet signed up for Medicaid or CHIP coverage but still can!  So this Sunday on Mother's Day, and over the coming weeks and months,  join us at the Children’s Defense Fund in honoring all of the moms out there (including your own!) by spreading the word about health coverage opportunities for children and their parents to those in your community.

Since the enactment of the Children's Health Insurance Program (CHIP) in 1997, the percentage of children who are uninsured has dropped 40 percent, thanks in large part to the combined impact of Medicaid and CHIP.  In 2012, together, Medicaid and CHIP provided comprehensive health coverage for more than half of all children in America.  While nearly 1 in 11 children in this country remain uninsured, the good news is that 70 percent of these uninsured children are eligible for Medicaid or CHIP and can enroll anytime!  There is no deadline and applications can be submitted online, in person, over the phone or by mail.  If the mothers you know don’t have access to the internet, they can call 1-800-318-2596 for assistance with an application.

To help ensure that children get enrolled in coverage, it is also important to get their parents enrolled.  Many mothers and fathers became eligible and signed-up for Medicaid or subsidized health coverage in state marketplaces earlier this year—some of them for the very first time.  Medicaid-eligible parents who have not yet enrolled can apply for coverage year-round – the open enrollment periods you hear about don’t apply to Medicaid or CHIP.  This is good news for many mothers and great news for their children. Studies and state experience have consistently shown that getting parents health covered is key to getting their children covered, even if they have different sources of coverage.  Recent estimates suggest low-income families with uninsured parents were three times as likely to have uninsured children compared to parents with Medicaid or private coverage.  The 26 states and the District of Columbia that have taken up the Medicaid expansion are helping children too by boosting families financial security and providing children with better care from healthier parents.  We must all work together to ensure that all eligible poor and low income parents are enrolled in Medicaid in these states.

You can also help to make the case to expanded eligibility for Medicaid for low income adults in the 24 states that have not yet agreed to provide Medicaid to these parents and others. The Federal government will pick up virtually the full cost of the Medicaid expansion and save states money at the same time.  In addition to the direct effect on health, this new money would also generate jobs and new economic development within the states.  There are nearly 6 million adults who are being denied health coverage through Medicaid because governors and state legislatures are playing politics with the lives of parents and children.  The majority of these are poor, Black, and live in the South.  Six of the ten Southern states that have declined funding for the expansion of Medicaid were among the states with the highest child poverty rates in the country in 2012.

So this Mother's Day, make your mom proud.  Help eligible mothers and fathers enroll in Medicaid and enroll their children in Medicaid or CHIP.  In states that have not yet extended Medicaid to low income parents, join with others in your state who are making the case for political leaders to support Medicaid expansion – the health and futures of millions of mothers and children depend on it.

Alison Buist is the Director of Child Health (and a mother of two) and Kathleen King is the Senior Policy Associate for Child Health at the Children's Defense Fund.